The Philippine stock index plunged nearly 4% and was headed for its worst day since mid-April as the country reopened after a long weekend and caught up with the volatility in global stock markets.

SINGAPORE: Philippine shares were the hardest hit on Monday, as fears over a second wave of coronavirus infections hurt risk sentiment and depressed Asian stock and currency markets.

The Philippine stock index plunged nearly 4% and was headed for its worst day since mid-April as the country reopened after a long weekend and caught up with the volatility in global stock markets.

The Philippines reported hundreds of new coronavirus infections on the weekend, just days after lockdown restrictions were eased.

China also reported its second consecutive day of record new numbers of cases, raising worries about a resurgence of the disease, although stock markets on the mainland appeared unperturbed.

U.S. stocks ended Friday marking their worst week since March after the Federal Reserve's indication of a long road to recovery and rising infections in the United States hurt investor optimism.

Singapore stocks and Malaysia's fell more than 1% each.

Among currencies, the South Korean won was the region's worst performer.

Analysts said Philippine markets were also worried about data showing overseas remittances, a large source of dollar flows for the economy, in March fell 4.7% from a year earlier, highlighting the adverse impact of the virus on Filipinos living abroad. The peso was flat having weakened about 0.1% against the dollar earlier.

"Slowing remittance flows is one of the main reasons we expect current account woes to return to the Philippines, which should put added depreciation pressure on the peso in the coming months and slow the economic recovery with remittance-fuelled consumption absent," analysts at ING wrote in a note.

Analysts at Morgan Stanley said the risks of a second wave lay in India, Indonesia and the Philippines but that they expected the resurgence of the disease to be more manageable than the first wave, given earlier policy experience.

Indonesian shares were flat, even as it reported hundreds of new cases. The rupiah was marginally higher against the dollar although its high-yielding bonds fell ahead of a central bank meeting on Thursday at which policy rates could be cut. 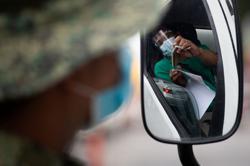 Warding off the dreaded second wave