"The good news is the country may have turned the corner in the coronavirus pandemic, but the bad news is economic growth is going to just limp along if it has to carry millions and millions of jobless workers who cannot support themselves and are running out of benefits to pay the bills," said Chris Rupkey, chief economist at MUFG in New York. (Filepic shows Americans lining up to collect jobless claim forms.)

WASHINGTON: The number of Americans filing for unemployment benefits dropped below 2 million last week for the first time since mid-March, but remains astonishingly high as companies adjust to an environment that has been significantly changed by COVID-19.

Other data on Thursday showed a jump in the trade deficit in April as the pandemic upended the global flow of goods and services, pushing exports to a 10-year low. The reports buttressed expectations the economy's recovery from the coronavirus crisis would be a long slog even as activity appears to be stabilizing.

"The good news is the country may have turned the corner in the coronavirus pandemic, but the bad news is economic growth is going to just limp along if it has to carry millions and millions of jobless workers who cannot support themselves and are running out of benefits to pay the bills," said Chris Rupkey, chief economist at MUFG in New York.

Initial claims for state unemployment benefits fell 249,000 to a seasonally adjusted 1.877 million for the week ended May 30, the Labor Department said. Economists polled by Reutershad forecast new claims would drop to 1.8 million in the latest week.

Though claims have declined since hitting a record 6.867 million in late March, they are three times larger than their peak during the 2007-2009 Great Recession. Still, the report suggested the worst is over for the labor market, combined with data on Wednesday that showed a smaller-than-expected drop in private payrolls in May.

Surveys have also shown consumer confidence, manufacturing and services industries stabilizing, albeit at low levels in May, indicating the downturn triggered by a near shutdown of the country in mid-March to control the spread of the COVID-19 respiratory illness was bottoming. Many businesses had reopened by mid-May.

The stubbornly high number of unemployment claims comes from a second wave of layoffs as businesses navigate weak demand, as well as some lingering backlogs at state unemployment offices overwhelmed by the flood of applications early in the shutdown.

Boeing and pipeline operator Energy Transfer have announced layoffs, while some big retailers like JC Penney and high-end chain Neiman Marcus have filed for bankruptcy. States and local governments, whose budgets have been decimated by the COVID-19 fight, are also cutting jobs.

"The evidence of unemployment spreading to other industries and larger companies is clear, and that may slow, or even temporarily reverse, our progress," said Robert Frick, corporate economist at Navy Federal Credit Union in Vienna, Virginia.

The government's closely watched employment report for May, due on Friday, is likely to show nonfarm payrolls falling by 8 million after a record 20.537 million plunge in April, according to aReuters survey of economists.

Stocks on Wall Street were trading lower after recent hefty gains. The dollar <.DXY> was steady against a basket of currencies. U.S. Treasury prices fell.

The weekly jobless claims report, the most timely data on the economy's health, could become difficult to parse in the weeks ahead. Initial claims are recorded when a person submits a first application for unemployment benefits. Once approved, they become continuing claims and are reported with a one-week lag.

As part of a fiscal package worth nearly $3 trillion, the U.S. government greatly expanded eligibility for unemployment benefits to include self-employed and independent contractors who have been affected by the COVID-19 pandemic.

These workers do not qualify for the regular state unemployment insurance and must file under the Pandemic Unemployment Assistance (PUA) program.

The government also extended regular state jobless benefits by another 13 weeks under a program called Pandemic Emergency Unemployment Compensation (PEUC). Roughly 30 states are now reporting PUA claims on a weekly basis, but PEUC figures are reported with a two-week lag.

Neither PUA nor PEUC are included in the initial claims and continuing claims figures, which economists say grossly understates the tragedy caused by COVID-19. Last week, 623,073 PUA applications were processed on top of the 10.741 million during the week ended May 16.

Continuing claims, the number of people still receiving unemployment benefits after an initial week of aid, increased 649,000 to 21.487 million in the week ending May 23. Economists believe continuing claims peaked at 24.9 million in early May.

A total of 30 million people were receiving unemployment benefits under all programs in the week ending May 16, slightly down from 31 million in the prior week.

"The (business) re-opening path and the impact on employment may not be as smooth as hoped," said James Knightley, chief international economist at ING in New York. - Reuters 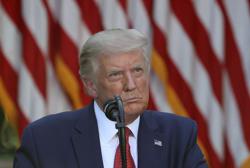