Revving up: A tuk-tuk driver near the Grand Palace in Bangkok. Thailand will begin the third leg of a four-stage easing of its lockdown soon to kickstart the economy. — AFP

BANGKOK: Thailand’s Parliament approved a 1.9 trillion baht (US$60bil) stimulus package to counter a recession, but divisions emerged in the ruling coalition over how to monitor the programme.

Lawmakers on Sunday voted in favour of bills authorising one trillion baht of borrowing for government spending and 900 billion baht of steps by the Bank of Thailand.

Two key parties in the ruling bloc supported opposition calls for stronger oversight of the programme.

The opposition argued that Prime Minister Prayuth Chan-Ocha’s military-backed coalition of more than a dozen parties could fracture amid infighting stoked by the coronavirus-induced economic crash.

“This doesn’t necessarily imply the weakening of the coalition but signals ongoing internal negotiations, ” said Titipol Phakdeewanich, dean of the faculty of political science at Thailand’s Ubon Ratchathani University.

“The coalition’s goal is to win the next election, and it will likely stick together until then.”

The government has a majority of just over 60 in the 500-seat lower house of parliament. The Bhum Jai Thai and Democrat parties account for about two-fifths of the ruling alliance.

Thailand on Monday begins the third leg of a four-stage easing of its lockdown, as officials try to kickstart the economy after novel coronavirus cases dwindled. At the same time, the government has extended a state of emergency to June 30 despite opposition calls to scrap it. — Bloomberg 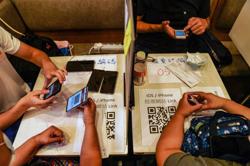