Trading volume appeared to be on the medium to large-capitalised shares this time around at 9.04 billion shares.

Hartalega added 8.83 points to the FBM KLCI while Top Glove nudged the index up by 0.97 of a point. The benchmark FBM KLCI was up, despite wobbly sentiment in the Asian markets, climbing slightly over 1% on a firmer broader market.

The FBM KLCI was the top performer among Asian indices during yesterday’s trade.

The broader market saw advancers beating decliners 650 to 403 while 363 counters were unchanged. There were 484 counters untraded.

“The country is home to the world’s biggest glove makers Top Glove and Hartalega, which have surged in recent weeks due to rising demand for protective equipment during the global coronavirus pandemic, ” the wire service reported.

Market dealers said the trend could be attributed to retailers or hedge funds that are coming in to bump up glove makers despite record valuations.

CIMB was among the best performers among the banks, advancing 26 sen to RM3.77, adding 4.8 points.

CIMB was also among the top 10 most actively traded counters on Bursa Malaysia yesterday. 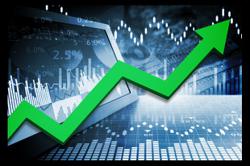