Wall Street ended lower on Thursday, a day after hitting two-month highs, on a fresh wave of China-U.S. tensions.

NEW YORK: Wall Street ended lower on Thursday, a day after hitting two-month highs, on a fresh wave of China-U.S. tensions that raised doubts about the trade deal reached early this year between the world's two largest economies.

Earlier, Secretary of State Mike Pompeo criticized Beijing's handling of the coronavirus outbreak, while a Chinese official said the country will not flinch from any escalation in tensions.

"It seems like China is going to be used as a punching bag for the upcoming elections," said Bob Shea, CEO and co-chief investment officer at TrimTabs Asset Management in New York.

"The White House has resolved to itself that it is more effective to swing at China than to salvage what was going to already be a watered-down Phase 1 trade deal. You don't score any points for that," Shea said.

The Nasdaq is about 5% below its February record high, fueled in recent weeks by gains in Microsoft , Amazon.com and other technology heavyweights that many investors expect to emerge from the crisis stronger than smaller rivals.

Amazon fell 2.05% on Thursday after touching a record intraday high earlier in the day.

The majority of the 11 S&P sector indexes declined, with energy <.SPNY>, utilities <.SPLRCU>, materials <.SPLRCM> consumer staples <.SPLRCS>, and technology <.SPLRCT> each down 1% or more.

Best Buy Co Inc fell 4.4% after the electronics retailer reported a 5.3% drop in quarterly same-store sales due to the virus. L Brands Inc surged 18% despite posting worse-than-expected quarterly results but said it will scale down its struggling Victoria's Secret unit [nL4N2D32OI][nL4N2D23WF][nL4N2D33C0]

Discount chain owner TJX jumped nearly 7% to a more than two-month high after it flagged strong sales at its stores that have reopened after lockdowns. [nL4N2D32XI]

Volume on U.S. exchanges was 10.1 billion shares, compared to the 11.3 billion average for the last 20 trading days.

Declining issues outnumbered advancing ones on the NYSE by a 1.00-to-1 ratio; on Nasdaq, a 1.40-to-1 ratio favored decliners.

European equities <.FTEU3><.STOXX> fell about 0.8%, while the S&P 500 and Nasdaq on Wall Street declined about the same.

The dollar edged higher as investors weighed the impact of global business lockdowns and the euro's four-day rally against the U.S. currency ran out of steam. The strong dollar pushed gold down more than 1%, off this week's 7-1/2 year peak.

Rising tensions between Washington and Beijing raised doubts about the "Phase 1" trade deal reached early this year and also supported the safe-haven dollar.

President Donald Trump warned the United States would react "very strongly" against China trying to gain more control over Hong Kong through new national security legislation. Tension between the two countries has heightened in recent weeks, as they exchange accusations on the handling of the coronavirus pandemic.

"The biggest threat to the U.S. market this year is actually the potential for ignition of the tariff war, between the U.S. and China," said Kristina Hooper, chief global market strategist at Invesco in New York.

Purchasing manager index surveys (PMIs) in Europe confirmed economic activity has begun to return, though they were far from stellar.

Euro zone-wide figures came in better than expected overall but Germany's improvement undershot forecasts. It was the third month in a row that the surveys were plonked firmly in economic contraction territory.

Oil rose on the view that fuel demand should rebound. Brent, the international benchmark, has bounced up $20 a barrel over the past month.

The market absorbed the latest glut of government debt to pay for coronavirus support programs fairly smoothly. The United States on Wednesday auctioned $20 billion of 20-year debt, the first such sale since 1986.

Italy sold roughly the same on Thursday and Spain said it will need to raise almost 100 billion euros more than planned.

U.S. weekly jobless claims came in at a seasonally adjusted 2.4 million, in line with a Reuters survey of economists ahead of the data and well off the record 6.867 million at the end of March. 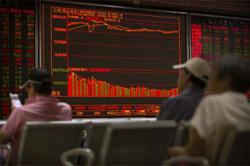