Re-rating of TM seen likely if included in FBM KLCI

The results and prospect of a review have some analysts reviewing their call on the stock and earnings, although some do expect the second quarter results will be better.

(TM) is likely if it is included in the FBM KLCI index with the review expected in June.

However, for the first quarter ending March 31, its net profit shrank by half to RM152.5mil versus RM308.2mil a year earlier.

The results and prospect of a review have some analysts reviewing their call on the stock and earnings, although some do expect the second quarter results will be better.

“We believe investors are also aware of this (possible inclusion of TM into FBM KLCI) which could prove to be a positive short-term re-rating catalyst for the stock should it materialise. However, we anticipate the stock could see a correction should it face more challenges in the medium term, ’’ Kenanga Research said in a note.

JF Apex Securities said it was reducing its revenue and earnings per share (EPS) forecast for financial year-FY2020 by 9% and 17% respectively.

“We expect earnings to improve in the second half of this year as TM resumed Unifi installation only in late-April with other businesses to pick up later, ’’ the brokerage said, and it has downgraded the stock to a “sell’’ after the results were announced.

However, PublicInvest Research felt that even with millions of people working from home as demand for online services increases, the growth in consumption may not necessarily translate into higher revenue for TM as user’s plans are already factored in.

It said demand from enterprise businesses should also decline during the movement control order period.

“Revenue aside, we believe cost will be the key driver to TM’s earnings trajectory going forward. We expect cost to increase in 2HFY20 due to higher capex spend and project roll-outs with a gradual opening of the economies, ’’ it said.

“In our view, the valuation looks pricey, considering its uninspiring revenue and profit outlook, weak domestic economic conditions and rising competition in the fixed broadband and enterprise market.

“In view of the favourable risk reward proposition, we downgrade TM to sell from hold, ’’ said AffinHwang. It adds that the key upside risks were robust subscriber growth in the Unifi and Enterprise business segments, stronger-than-expected quarterly earnings arising from further cost optimisation/higher revenue contributions from other businesses, and value-accretive mergers and acquisitions.

Maybank said TM had withdrawn its original FY20 profit & loss guidance which was low to mid-single digit revenue decline and RM1b EBIT (earnings before interest and tax) with an updated guidance to be provided when visibility improves. 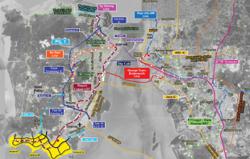