MADRID: Signals are emerging that the coronavirus outbreak in Spain may drive home-buyers out of city centres, according to one of the country’s biggest residential developers.

Since the coronavirus outbreak surged in March, Aedas Homes SA has observed a 25% increase in inquiries by people looking for lifestyle changes due to the health emergency. Customers are also asking more often to modify the homes they order, requesting bigger terraces or to swap for a house with a garden, chief executive officer David Martinez said.

Spaniards have endured one of the strictest lockdowns in Europe to stave off the spread of Covid-19, leaving most of them stuck in apartments and houses for two months with little or no access to outside spaces. But the quarantine has also proved that working from home can be as productive as from an office for many employees.

“There are early indicators that the coronavirus is starting to change the way of buying homes, ” Martinez said in an interview. “There are more leads in developments in the outskirts of Madrid than the ones we have in the city centre.”

Other countries have also already seen demand shift away from city centres. In New York, real estate agents have noticed a significant increase in demand for rentals in the suburbs as people seek more space. In Istanbul, suburban real estate prices have risen 20% during the pandemic as people seek homes with a garden, Dunya newspaper reported.

Aedas was founded by majority shareholder Castlelake LP of Minneapolis in 2016 to develop the land bank it had accumulated following the collapse of Spain’s real estate market.

The boost in customer inquiries also includes searches for larger properties and for those that can accommodate working from home, such as having a spare room that can serve as an office, Aedas said.

The Spanish company, with assets of about €1.5bil (US$1.6bil), is in advanced negotiations with various US banks and a German bank to extend a €150mil loan due Aug 8 by two years, Martinez said.

Aedas, which has a land bank of 15,000 units, has put on hold acquisitions of new land purchases while it evaluates the impact of coronavirus and to see if prices fall, Martinez said.

The health crisis may also ease red tape in the Spanish real estate sector, the CEO said. Two of the key municipalities in which Aedas operates, Madrid and Malaga, have said they will reduce rules by eliminating the need for a certificate of habitation, which on average takes between three and six months to obtain, Martinez said.

“Imagine how with a home sold, finished, ready for occupation the client can’t occupy it, can’t pay because a municipal official hasn’t gone to visit and ensure that everything is all right, ” Martinez said. “We hope that other local administrations will follow.” — Bloomberg 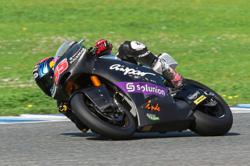 Hafizh and Kasma off to Spain to prepare for Moto2