CPO prices to remain under pressure on soft demand outlook

"We expect the palm-oil inventory level to rise further in the coming months as we believe consumption for palm-oil products could potentially slow, especially for the food industry and energy sector," it said.

The research house kept its CPO price assumptions for 2020-21 at RM2,100-2,200/MT given its more cautious stance on the demand outlook and weak crude oil price environment. This compares to April's average MPOB locally delivered CPO price of RM2,299/MT, which was 3.5% lower m-o-m.

CPO production in Peninsular Malaysia, Sabah and Sarawak increased 18%, 23.1% and 13.5% respectively during the month.

Over the four months to April 30 however, Malaysia's CPO production fell 16.6% year-on-year to 5.5 million due to weak production in the first three months of the year.

Affin Hwang does not expect a huge increase in exports as the coronavirus is expected to slow down the global economy even some countries could be restocking edible oils amid the easing lockdowns.

lead to a lower consumption of edible oils, in our view," it said. 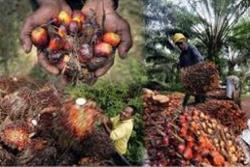