THE National Property Information Centre (Napic) released the overall property market statistics for the fourth quarter of 2019 with headline figures that suggest home prices are still on a rising trend while overhang remains a concern.

Within the sub-sector, growth in home prices were strongest in the terraced category, rising by 3% y-o-y while high-rise units rose by just 0.7%. By state, the strongest growth was seen in Perlis and Kelantan, with the HPI rising by 9% and 8.8% respectively.

Kuala Lumpur was the only geographical area to report a drop among all the states as prices fell by 0.4% y-o-y, mainly due to a 3.4% drop in the high-rise segment in the KL Central zone.

All the above data is overwhelmed by two key data – the level of overhang in the market, both in residential and commercial segment as well as planned and future supplies, which basically paints a bleak and gloomy picture for the property industry as a whole.

First the level of overhang in terms of number of units is actually about 25% of past launches and they are in this category as developers have failed to sell them to the market despite being completed more than nine months. Of the total, almost 49% in number of units are high-rise units.

At the same time, there are some 72,692 units that remained unsold but are under construction.

The good news is that this is about 10% lower than in 2018 but it is more than double of the overhang units. 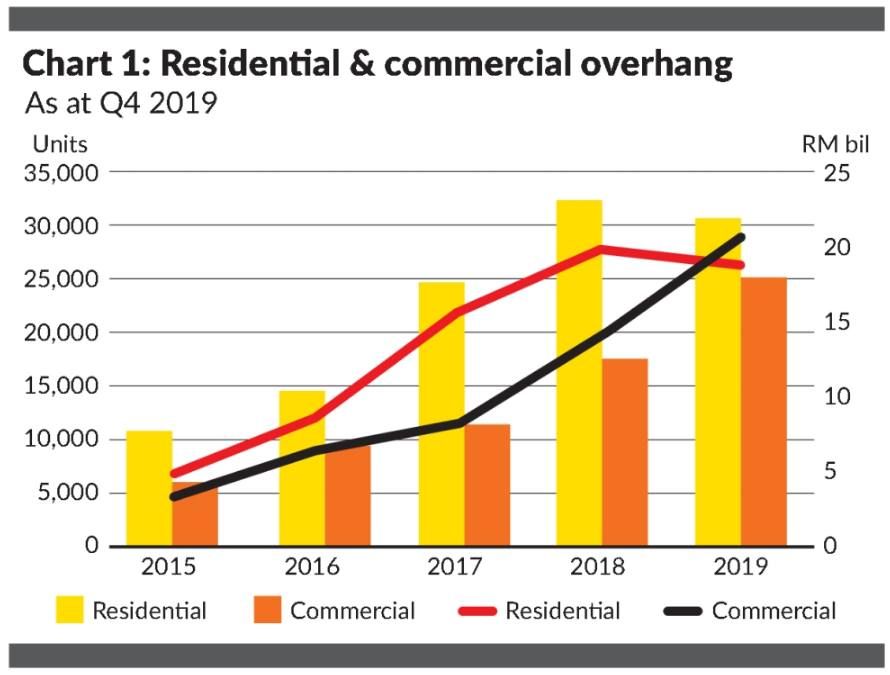 As can be seen in chart 1, it is also the first time that the value of commercial overhang surpassed the residential segment.

Similar to the residential segment, the level of overhang is also about 25% of past launches and they remained unsold nine months since completion.

Astonishingly, 68.4% of the total units that are deemed to be in the overhang category are service apartments.

For commercial segment, much of the overhang is actually in Johor as some 56% of the total is in the southern state.

More of a concern would be the fact that 87% of the overhang in the commercial segment in the state are actually service apartments.

Similar to residential segment, the commercial segment too has a significant number of units that are unsold and under construction. As at end of 2019, there are some 44,528 units that remained in this category.

Without even discussing the planned and future supply of both the residential and commercial segment, which in total is about 1.3 million units and representing some 20% of combined existing stock units in both the segments, the current unsold units under construction is another worrying figure. Why so?

In 2019, total number of property market transactions stood at 328,647 units. Of this, some 63.7% of the transactions were related to residential segment.

There is no telling whether these transactions that originate from companies are deemed to be under the primary or secondary market transactions category.

As can be seen from table 1, primary residential transactions were about 17.9% and 20.8% of the overall residential segment transaction in volume and value in 2019 respectively. If we were to take the current market’s overhang status, the total is equivalent to about 10 months of existing clearance rate in the primary market in terms of number of units and 15 months in terms of value.

Worst, when one looks at the status of residential segment’s unsold and under construction segment, the numbers are equivalent to 23 months and 27 months in terms of annual clearance rates in units and value in the primary market.

Taken together the residential segment is sitting on a 33 months of existing clearance rate in the primary market and in value there are worth about 3½ years in value.

Clearly, the residential market is experiencing serious glut and it is about time for the authorities to take more drastic measure to contained future supply from being a burden to the economy in general and to the property market in particular.

While we do not have a bubble in the property market segment, a massive oversupply could mean that prices will take a long while to see any appreciation and this could remove one group of buyers from the market, i.e. the property investors. Hence, we need serious actions to contain future supplies in the market.

For a start, the authorities should only approve application by developers who have shown:

> Strong take-up rates of more than 80% for their current on-going projects;

> Have less than 12 months of unbilled sales, measured against annual revenue in their books;

> Have less than three months of ready inventory in hand; and

> Have less than 12 months of unsold units that are under construction, measured against total annual unit sales.

The local authorities can be stringent on developers based on the above criteria and developers must meet at least three out of the four conditions before they are allowed to launch new residential projects.

For others, until and unless they are able to prove that they have met at least three of the thresholds, they should not be allowed to launch new projects.

They should be placed under watch and be categorised to be under Launch Control Order (LCO), which basically restricts property development companies from launching new projects until and unless they have cleared their inventory to a certain extent, be it ready stock or those under construction.

If we as Malaysian can be restricted in our movement whether under the Movement Control Order (MCO) or Conditional MCO, there is no reason not to impose LCO on property developers. 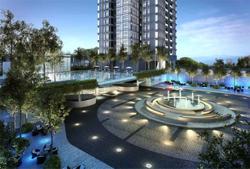 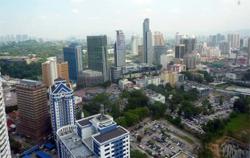 Value of residential overhang down in Q1 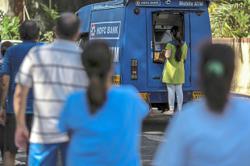