Show me the money!

By Inside Insights: PANKAJ C. KUMAR

IN the 1996 the movie “Jerry Maguire”, Jerry, played by Tom Cruise was left with one single client, Rod Tidwell played by Cuba Gooding Jr. Rod was nevertheless a difficult client to please and was seeking a new contract to not only keep his career but his expensive lifestyle. Rod asked Jerry to make a promise to enable him to retain Jerry as an agent.

The promise was for Jerry to show Rod the money, which indirectly means Rod wanted a big contract. Rod asked Jerry to utter the words “Show me the money, show me the money” While this week’s article is not “showing you the money” but it is giving you some ideas where money has been going the past couple of months in the local bourse, or in other words, the money flows into stocks.

We all know that the foreign fund managers have been net sellers in the market over the past four months and in fact were net sellers of up to RM10.43bil year-to-date as at 28-April. 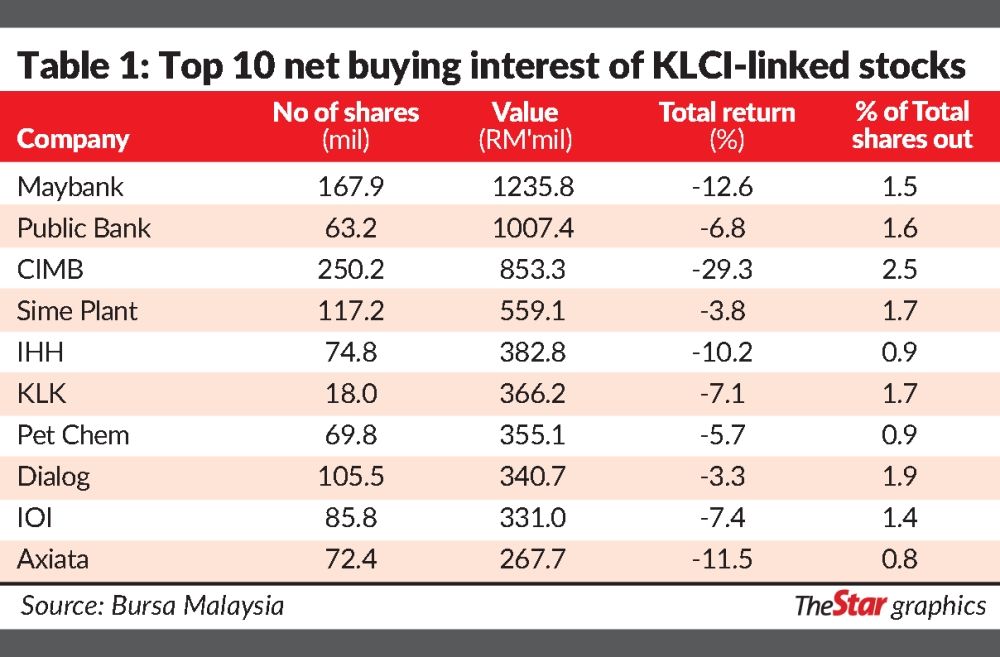 Much of these large movements of buying/selling started in March and continued well up to 28 April, which is the focus of analysis in this article. In fact, foreigners net sold RM8.32bil worth of stocks, while local institutions and retailers’ net buying amounted to RM5.67bil and RM2.64bil respectively.

This suggests that 80% of total foreign net selling year-to-date occurred during these two months period (i.e. from 2 March and up to 28 April) while local institutions and retail net buying during the same period represented 89% and 65% of the total net buying year-to-date. For listed companies, shareholdings of more than 5% requires disclosures to be made to Bursa Malaysia and among the most active local institutions are the Employees Provident Fund (EPF), Kumpulan Wang Amanah Pencen (KWAP) and Permodalan Nasional Berhad (PNB) owned funds, via Yayasan Pelaburan Bumiputra and Amanah Saham Bumiputera.

There was also one large transaction involving Khazanah’s disposal of some 85mil shares in Tenaga amounting to about RM1bil and sale of shares in MMC during the period by Urusharta Jamaah worth some RM56mil. Some of these shares were on the other hand were bought by local institutions too.

Among the three, EPF is the most active of them, in fact close to be trading on a daily basis on some of its positions involving some 84 companies out of which 25 are KLCI index-linked stocks while KWAP dealt with 29 companies, of which 6 were KLCI-linked while PNB’s dealing was limited to just about 12 companies, of which 5 were index linked. 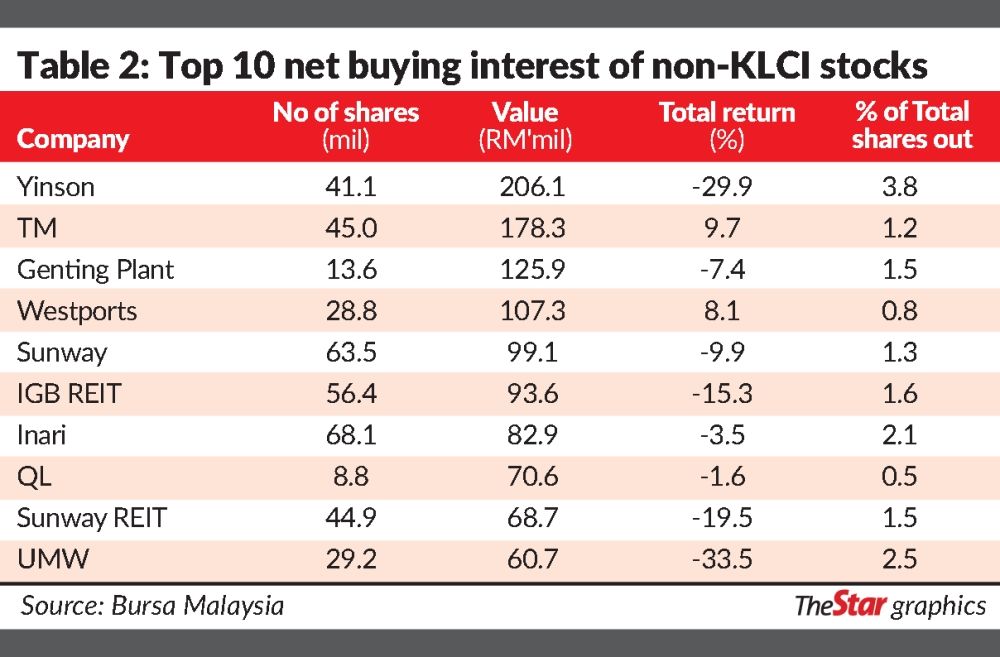 In terms of net buying by these institutions, EPF led the way with a total of RM7.95bil, followed by PNB at RM970mil and KWAP at RM837mil. Khazanah, due to sale of its stake in Tenaga, was a net seller with total sales of RM1.02bil.

Of this total amount, much of the total net buying was on index-linked stocks as EPF’s purchases were about 87% concentrated on this group of stocks while for PNB and KWAP it was about 73% and 81% respectively.

During this period, i.e. from end of Feb to 28 April, the KLCI fell by 7.4% and due to Covid-19, it also experienced wild swings as it fell as much as 18.5% before recouping 13.6% from the mid-March low. Table 1 summarizes the net buying interest by the three institutions, i.e. by EPF, KWAP and PNB in KLCI index-linked stocks.

Among the top ten index stocks, which accounted for 62% of all the net buying during the 2-months period by these three institutions, focus among was largely towards the banking sector, plantation, healthcare and oil and gas stocks.

Six out of these top ten stocks are actually are among the top ten KLCI stocks itself. Among these top ten traded stocks, some of the buying has helped the particular company’s performance to be better than the KLCI while for others, their performance was much poorer.

Companies like CIMB, Maybank, Axiata and IHH clearly underperformed the index. One could also note that the buying interest in these companies range between 0.8% for Axiata to as much as 2.5% for CIMB of their current shares outstanding.

Among the non-index stocks, the range of companies invested by the three institutions is rather diverse and across the board. Despite the net buying interest and within the top ten traded stocks, only four stocks have outperformed the market and they are TM, Westports, Inari and QL.

Interestingly, except for Inari, all three are potential future KLCI index-linked stocks as they presently occupy No. 26, No. 32 and No. 31 based on total market capitalization of listed companies as at end of last week. Table 2 also shows the net buying interest as a percentage of total shares out, which range between 0.5% for QL to as high as 3.8% for Yinson

Net buying interest can be said rather heavy for not only in Yinson but also on UMW Holdings, which basically shows the big boys sees values after the recent sell-off.

Lastly, what about net selling? It must come as a surprise that one of the sectors that the EPF has been reducing its stake is actually the glove sector. Having ceased as a substantial shareholder in Hartalega

in late January, EPF also ceased to be a substantial shareholder in Top Glove by the 8 April after selling some 7.9mil shares worth some RM50.8mil then. Other notable exits by institutional funds is summarised on table 3. It also shows that most of these stocks (for some stocks, it is the sum of net buying by one institution and net selling by another) have underperformed the market while companies like Time, Kossan, Top Glove, Bursa, Kossan and Axis Reits

remained outperformers as these institutions sold the shares on strength. Selling pressure was also obvious on companies like SP Setia, CMS, Padini and MMC.

The analysis on changes in shareholdings made by our local institutions is based on the following criteria:

⦁ The value of the net buying or selling position is based on the last traded price on 28-April except for exits which have resulted in cessation as a substantial shareholder.

⦁ The total returns analysis takes into account dividends that are declared and the stocks itself have traded on an ex-dividend basis.

While the changes in shareholding may not be material, as it perhaps represents just 0.6% in value of the total market capitalization of Bursa Malaysia, the buying and selling momentum has impact on stock price movements. Perhaps this analysis is able show investors to certain extent where is the institutional money flowing to over the past two months.

In addition, the analysis also shows that while EPF, PNB, KWAP and Khazanah had cumulative net buying of RM8.73bil, which is RM3.06bil or 54% more than market statistics that showed total local institutions’ cumulative net buying of RM5.67bil. This suggest that while the larger government linked investment companies have been net buyers, other local institutions have been net sellers.