Deal that brings together Bollywood and Hollywood

Indian movie producer Eros International Plc is merging with privately-held US filmmaker STX Entertainment in an all-stock deal that brings together Bollywood and Hollywood.

NEW YORK: Indian movie producer Eros International Plc is merging with privately-held US filmmaker STX Entertainment in an all-stock deal that brings together Bollywood and Hollywood.

The combined company, to be known as Eros STX Global Corp, will be publicly traded and have a valuation of more than US$1bil, including debt, according to people familiar with the details, who asked not to be identified as the matter is private.

It’s a rare deal in a mergers and acquisitions market that’s all but seized up as executives and investors grapple with the fallout from the pandemic.

Although discussions began six months ago, final terms were hammered out in recent weeks over conference calls, with part of the Eros deal team dialing in from India.

The transaction was signed virtually by an exchange of signature pages between lawyers, the people said.

Eros founder Kishore Lulla said his long-standing relationship and trust in his STX counterpart Robert Simonds, for whom his daughter was once an intern, was key to getting a deal completed under unusual circumstances.

Ultimately, the pandemic underscored the importance of the deal.

“I was always a believer that technology is going to change the studio model and everything is going to shift to digital, ” said Lulla, who will be co-chairman alongside Simonds.

In the last four to six weeks, the amount of time users spend on the platform jumped between 50% and 200%, Lulla said.

Joining forces will give the two independent companies more heft to compete with bigger studios as trends sweeping Hollywood have made it hard for smaller players to gain scale.

Between Comcast Corp’s Universal Pictures, the combination of Walt Disney Co and Fox Corp’s film companies, and AT&T Inc’s acquisition of Time Warner Inc, a trio of studios now own and produce many of the most well-known blockbuster movie franchises, including the Marvel superhero universe and DC Comics.

The result is a small group of big films increasingly dominating the box office.

The deal will give the company a bigger geographical footprint.

“My personal dream was always to be an important premium content provider globally in the markets that actually matter -- US, India and China -- and this combination is all three of those, ” said Simonds, who will become chief executive officer of the company.

STX films include comedian Amy Schumer’s “I Feel Pretty” and Jennifer Lopez’s “Hustlers”. The combined company expects to release 40 feature-length films this year, as well as content for services such as Netflix, Hulu and Amazon.

The combined company will have US$600mil in pro forma revenue for 2019 and US$300mil of “highly predictable” future revenue from STX films that have already been released. There will be about US$50mil in operating synergies.

The company will be domiciled in the Isle of Man with joint headquarters in Maharashtra, India and Burbank, California.

The deal comes less than two years after STX, which is backed by Internet giant Tencent Holdings Ltd, shelved its IPO plans.

STX’s backers TPG, Hony Capital and Liberty Global will provide some equity for the deal. The company will also have a US$350mil credit facility led by JPMorgan Chase & Co. 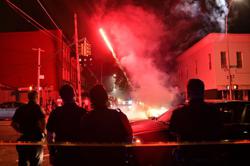