Latest forecasts from analysts show they are expecting rupiah gains in the second half of the year.

INDONESIA’S rupiah has been one of the biggest losers in Asian currencies from the coronavirus sell-off in risk assets – but there are signs the currency is set to strengthen later this year.

A gauge of one-month volatility has climbed above the 12-month indicator, indicating that uncertainty is likely to ease over the longer term. At the same time, while spreads on non-deliverable forwards have risen, they have done so less than in previous sell-offs.

Thirdly, the latest forecasts from analysts show they are expecting rupiah gains in the second half of the year.

Indonesia’s currency, which has been seen as a proxy for emerging-market sentiment, has faced heavy selling in recent weeks as the deadly pandemic has spread around the world. The rupiah has tumbled more than 15% this year even though the government has unveiled US$25bil of fiscal stimulus, temporarily scrapped a cap on the budget deficit and beefed up the central bank’s powers to intervene in the currency and bond markets.

The following shows why there may be some light at the end of the tunnel:

An index of dollar-rupiah volatility over the next month based on options has jumped above a similar gauge covering the next 12 months. Under normal circumstances, longer-maturity options have a higher volatility due to the greater uncertainty embedded over a longer time horizon. This reversal, which took place in early March, indicates traders believe the current heightened volatility will ease through the coming year.

Lower volatility will be a positive for the rupiah, as it helps encourage long-term investments in the currency and also enhances the attraction of carry trades.

The spread between one-month and 12-month dollar-rupiah non-deliverable forwards widened to as much as 1,051 basis points in late March as the coronavirus emergency intensified.

This signals an increase in bearish bets over a 12-month time horizon. Nonetheless, the spread is still well below those of previous risk-off episodes.

Following the shock devaluation of the yuan in 2015, the spread jumped as high as 1,129, while it climbed to 1,724 after the election of US President Donald Trump in November 2016. The relatively contained reaction this time round, at least so far, suggests the market isn’t expecting pressure on the rupiah to drag on into next year.

The shockwaves of selling that have reverberated around financial markets have meant many analyst forecasts have been thrown out the window. The very latest predictions though, should start to factor in the impact of the coronavirus.

What’s notable about this is that the majority predict the rupiah to strengthen during the second half of the year.

Bank Julius Baer & Co predicts the currency will appreciate to 15,840 per dollar by year-end from its level of about 16,400 on Monday. Morgan Stanley expects it to rise to 14,100 and Nomura Bank International is tipping 13,300. All of these predictions are from March 26 or later.

The bullish forecasts are in line with Bank Indonesia’s own estimate announced last week that the rupiah should strengthen to 15,000 per dollar by the end of 2020.

There was further positive news yesterday when the government sold US$4.3bil of dollar bonds, its largest ever offering of the securities to help finance coronavirus relief measures. The final yield was lower than the initial price guidance, indicating robust demand from investors.

All this is not to say the rupiah is out of the woods just yet. There could certainly be more selling in coming weeks and months as the crisis develops. At the same time though, the picture is far from being uniformly bleak. — BloombergMarcus Wong is an EM macro strategist, who writes for Bloomberg. The observations he makes are his own and not intended as investment advice. 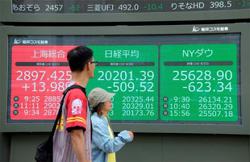 WHO seeks good ties with U.S. despite Trump's exit move