(TNB) could see a slight dent to its earnings for the financial year ending Dec 31,2020, due to the offering of staggered discounts for electricity consumption in the country.

According to CGS-CIMB Research, the energy giant’s net profit could be impacted by about 2% due to the RM150mil set aside for the initiative, as part of its corporate social responsibility (CSR).

As such, the research firm cut its estimates for TNB’s earnings per share for the financial years 2020-2022 by 0.4%-2.1% to factor in the additional CSR expenses.

It, however, reiterated its “add” recommendation on TNB, with an unchanged target price of RM14.30 based on sector average valuation of 15 times estimated 2021 earnings.

“We like TNB as the regulatory risk from sector reforms seems to be low, as it will likely maintain its monopoly position in the transmission and distribution segment and it is one of the cheapest big-cap counters, with a decent dividend yield of 4% for 2020-2022, ” CGS-CIMB Research said in a report.

Under the Prihatin Rakyat economic stimulus package announced last Friday, the government had further enhanced the electricity bill discount to 15%-50% (from April to September 2020), capped at 600kW per month.

The staggered discount of 15%-50%, amounting to RM532mil, would be jointly funded by TNB (RM150mil) and the government (RM382mil via Kumpulan Wang Industri, KWIE).

“We are surprised that the group is setting aside RM150m for the staggered discount, as we estimate KWIE fund has sufficient buffer to absorb up to RM1.03bil of discounts.

“TNB has also previously pledged RM10mil to the Health Ministry to fight Covid-19.

It expected TNB’s earnings to be relatively resilient to the movement control order as electricity supply falls under essential services.

“Most of its regulated earnings should be intact under the revenue-cap regime, except for consumer services which are under the price-cap framework.

CGS-CIMB Research said the estimated 2020 revenue requirement for consumer services was around RM1.2bil and return on assets was RM23mil under the incentive-based regulation regulatory period 2 (2018-2020).

It noted that TNB’s 2020 estimated core net profit could decline by around 0.1% for every 0.1% decline in electricity demand growth, based on its sensitivity analysis. 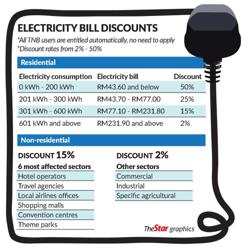 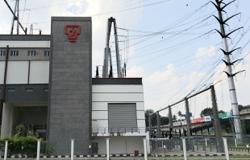