A view of the Kesas highway on March 20. Gamuda says it is waiting further direction from the Ministry of Finance on the status of the proposed acquisition of its stakes in four highway concessionaires, including Kesas.

posted a higher net profit in the three-month ended Jan 31 on improved contribution from its construction division, but its next quarter outlook is less certain.

The builder recorded net profit of RM175mil in the second quarter compared with RM173mil made a year ago.

The company, in a filing with Bursa Malaysia today, said the status of proposed take over of its stakes in four highways concessionaires by the government is now up in the air.

"Due to the change in the Federal Government, the group awaits further direction from the Ministry of Finance on the status of this acquisition," it said.

Meanwhile, the group's main construction division is almost at a halt.

Gamuda said work at most construction sites have been suspended since March 18 in compliance with the movement control order (MCO), that has now been extended to April 14.

Only the tunnelling work on the MRT Line 2 project is on-going due to public safety concerns.

"There will be a great deal of uncertainty over the coming months due to the unfolding global health crisis, oil shock and turmoil in the financial markets affecting economic activity, investor confidence and consumer sentiment," Gamuda said.

"The low oil price will also constrain the government’s plans. In view of this, the group will remain prudent, while continuing to build resilience, navigating the change and to be fit and ready when the upturn ensues," it said.

The group is hoping to start several projects in Penang including a planned light rail transit (LRT) line, a new highway and island reclamation works.

Gamuda's 60%-owned SRS Consortium was appointed by the Penang state government on August 14, 2015 as the project delivery partner (PDP) for the Penang Transport Master Plan.

Gamuda said the PDP agreement is expected to be signed in the second quarter of 2020. 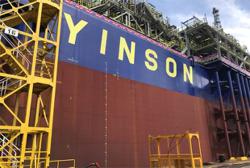