Leadership goes beyond the job scope

Stressing a point: Kim speaking at the Adaptive Leadership: Leading an Agile Workforce for the 21st Century training programme at Menara Star.

PETALING JAYA: A job description is something written down whereas leadership is not.

Having the status and credibility to do what needs doing is something that goes beyond the job scope.

Centre for Asia Leadership Initiatives (CALI) president and co-founder Samuel Kim said there were organisations that were still in the state of mediocrity with leaders only doing the jobs that needed to be done.

“Don’t be fixated on the job scope mindset on just getting the work done and just meeting the expectations of the bosses and the company.

“I call that a must, that’s not leadership at all. Because the job description doesn’t say that you have to help people see what the problem is or that you’re supposed to point out where the elephant in the room is.

“That’s something that people are quite reluctant to do because they want their comfort, ” he said, adding that when one is always in the state of comfort, it would only lead to mediocrity and decay.

Kim shared this during a training programme called the “Adaptive Leadership: Leading an Agile Workforce for the 21st Century”, organised by CALI and Star Media Group, in collaboration with the Jeffrey Cheah Foundation.

He said the key takeaway from the training programme was how to do a strict reality check and to understand how one really is. “You should be the one to do it, rather than assume that at some point in time, the problem is going to be going away.

“Assumption is sort of a mindset too, assuming that things are not going to change.

“What I talked about is a lot of mindset. Mindset is going to lead to certain ways that human beings behave, ” said Kim.

Among those who attended the two-day training programme last week was Petronas senior legal counsel Sherene Lee, who said that the concept of adaptive leadership has opened her eyes to styles and values that she would be able to practice.

“It would be very relevant to where I come from, where we have agility as a concept where we have to work with various people, not just within the structure we’re confined to.

“It’s not just us and our immediate superiors. But it’s also us dealing with a lot of team members in an agile mode and in that interaction we definitely have to adapt ourselves with the different styles and having to make it effective in our leadership, ” said Lee.

Walter Loh, an assistant manager at the Human Resources Development Fund transformation management office said the training session was very thought provoking, which made him want to self reflect, introspect and assess whether what he had been doing actually worked, to strategise and restrategise.

“To be a leader, you got to build alliances to actually drive a change and the adaptation that you want for the organisation.

“You also got to do experimentation, be brave to dance around the edge, do it carefully and in a safe environment so that you get meaningful change progressively, ” he said.

Meanwhile, CALI will also be organising the 3rd Asia Leadership Forum in partnership with Star Media Group on May 16 at Sunway University which will feature faculty members and fellows from Harvard and also Kim.

The conference will share mainly on what was being thought at Harvard now, the skills and the mindset.

Plenary sessions and simultaneous master classes will focus on topics ranging from “Future of Work” and leadership mega-trends and sustainable innovative leadership to persuasive leadership and the art of strategic influence.

Registration fees including tax are RM900 (early bird rate until April 4/group rate for three and above) and RM1,050 (regular rate).

The conference is HRDF-claimable. Sponsorship queries may be sent to anne.cortez@asialeadership.org. 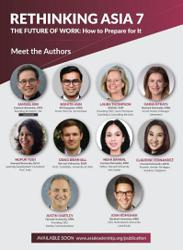