(SDP) tremendously in shoring up its balance sheet, which stands at a gearing level of 55% at present.

However, the company would possibly need to deal with lowered valuations if a sale were to go through at this point in time due to the recent fall in the price of crude palm oil (CPO) over the Covid-19 pandemic and oil price crash.

Given the present market sentiment, some analysts think that a sale might not materialise just yet.

“I don’t think this is a situation which would be favourable to the seller, given the fragile market sentiment. If this is the case, then it could be delayed. However, it would be a good thing to explore once everything settles down, ” says an analyst with a local institution.

It was reported over the past week that SDP is said to be mulling a multi-billion-ringgit corporate exercise involving its plantation estate in Indonesia, known as Minamas Plantation.

A report by The Wall Street Journal said that the world’s biggest oil palm grower by acreage is looking at options to spin off its Indonesian oil palm plantation that could value the business at up to RM10bil.

The report said that SDP was looking to either undertake an initial public offering or a strategic sale of PT Minamas Gemilang.

In response, SDP said in a Bursa Malaysia announcement the following day that it undertook many corporate exercises that were exploratory in nature and might involve various parts of its business.

These exploratory exercises may sometimes require the company to issue requests for proposals for consultancy and financial advice, SDP added.

The Minamas estate spinoff or flotation rumours are not new and have been around for many years now since its establishment.

A source says that the Minamas subsidiary has always been cordial with the headquarters in Kuala Lumpur, and that there has always been a Malaysian chief executive officer or chief financial officer at Minamas.

“While the legal system in Indonesia differs from Malaysia, the legal teams have always worked closely, ” the source adds.

The company’s Indonesian unit has been with the group even prior to its establishment from the mega-merger in 2007 and was originally under Kumpulan Guthrie Bhd.With Permodalan Nasional Bhd as its common shareholder, Guthrie was merged at the end of 2007 with Sime Darby Bhd

With the merger, SDP is considered to be the biggest listed oil palm plantation in the world by land size even until today.

There also have been issues pertaining to the Minamas plantation that are somehow linked to the almost annual recurring haze scenario in both Malaysia and Indonesia.

In one instance that took place during the depths of the haze crisis in June 2013, SDP was reported to have said that while the hot spots were located in concession areas that were within its Minamas subsidiary, Bhumireksa Nusa Sejati, the satellite data and on-the-ground assessment showed that the fires were not in the areas planted by the company.

Following that incident, coupled with the severity of the haze, Minamas had in the following year achieved its first ever Roundtable on Sustainable Palm Oil (RSPO) certification for smallholders.

The idea of a revival of this sale now by SDP also does not surprise analysts.

TA Research says, in its report, that its management had previously guided that the company was looking to monetise its assets and strengthen its balance sheet further.

“According to its 2018 annual report, subsidiaries of PT Minamas Gemilang reported a net profit of RM266mil and carried net assets worth about RM4.0bil. However, we believe the plan is still at an exploratory stage and management is most likely to sell a stake in PT Minamas Gemilang instead of disposing of the entire asset, ” the research house adds.

TA Research has maintained a “buy” call on SDP, with an unchanged target price of RM5.53 a share.

In another report, RHB Research says that the reported valuation of the estimated US$2.5bil (RM10.5bil) valuation tag on Minamas would translate to about US$12,400 per ha or about RM52,400 per ha, which is reasonable from its viewpoint.

“Recent landbank transactions in Indonesia have ranged between US$10,000 and US$15,000 per ha. We understand SDP’s Indonesian subsidiary only has a debt of around RM500mil currently, ” RHB Research, which has maintained its “neutral” call on the counter with a target price of RM4.85 on SDP, says.

“We believe one of the reasons why SDP would want to dispose of or spin off its Indonesian subsidiary is to reduce its net gearing position, which stood at 55% at the end of financial year 2019 (FY19), ” it adds.

It notes that on a price-to-book (PTB) valuation basis, US$10.5bil implies a PTB value of 2.7 times (based on FY18’s book value), which is relatively high in comparison to its Indonesian peers.

However, it notes that this is in line with its Malaysian big-cap planter peers. Any sale at the right time would definitely whet the appetite of investors under normal market circumstances, as it would create a leaner balance sheet structure for the company. 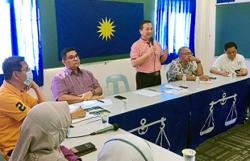