Margin calls on the rise as share prices plunge

A remisier told StarBiz that the number of investors receiving margin calls has “increased tremendously” over the past week, especially with the FBM KLCI falling by almost 4% on Monday and many oil and gas stocks posting sharp declines.

PETALING JAYA: Increasing margin calls over the past week has raised concerns about its potential impact on the market, which has already been hit due to uncertainties relating to the Covid-19 outbreak, political uncertainties and the recent crash in oil prices.

Remisiers, meanwhile, said they have already seen a jump in the number of margin calls and fear this may continue in the near term, given the market uncertainties.

A remisier told StarBiz that the number of investors receiving margin calls has “increased tremendously” over the past week, especially with the FBM KLCI falling by almost 4% on Monday and many oil and gas stocks posting sharp declines.

“We had a few of our clients scrambling to top up and most of them managed to do this, ” said the remisier, who declined to be named.

He said some of his other clients, who were unable to top up to meet the margin requirements, had no choice but to sell their margin stocks as well as their other core holdings.

“If we see another sharp plunge within the next few days, there will definitely be another round of margin calls, ” he said.

Another remisier said there was “a sense of panic”, resulting in a spike in margin calls early this week.

“That is why during times like these, all stocks suffer – even those with good fundamentals.

“Hopefully with the formation of the new Cabinet, the market will soon stabilise and find some support, ” he said.

A plunge in share prices trigger margin calls, which could lead to forced selling if investors fail to top up the value of their pledged collateral with cash, and this ultimately puts further pressure on the share prices.

“The number of margins calls will inevitably increase, based on the drastic fall seen on Monday.

“We saw some recovery today (yesterday) but global markets continue to be very volatile, ” he said.

Margin financing is essentially the borrowing of cash from one’s stockbroker in order to finance share trading and investment activities.

The purchased shares are then used as collateral for the margin loan, with investors required to pay interest on the borrowed sum.

Via margin financing, a trader can take advantage of promising trading opportunities and purchase stocks beyond his or her investment capacity. 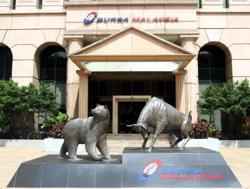