Slow gains: The Nestle SA headquarters in Vevey, Switzerland. The food giant has pushed back its growth target due to slowing revenue from China. — Bloomberg

ZURICH: Nestle SA pushed back its target for sales growth as revenue from China slowed even before the outbreak of the novel coronavirus in the Nescafe maker’s second-largest market.

Nestle will need one or two more years to return to increases of 4% to 6%, chief executive officer Mark Schneider said on Thursday. The stock fell as much as 2.1%.

Revenue climbed 3.5% on an organic basis in 2019, just short of analysts’ estimates, as the bottled-water business had its worst performance in a decade.

“With what we know now, in February 2020, it wouldn’t have been correct to say, ‘we’ll make the 4.0%’, ” Schneider told journalists at Nestle’s headquarters in Vevey, Switzerland. “We’re giving ourselves more time.”

The only market that’s bigger than greater China for Nestle is the US. The food company gets 8% of total sales from that region in Asia. Most of Nestle’s 30 factories in China have reopened this week, though they’re operating at reduced capacity. Nestle said it was too early to quantify the impact from the coronavirus.

Restructuring costs and other trading expenses tripled to 2.6 billion francs (US$2.7bil), as Nestle wrote down the value of the struggling Chinese brand Yinlu. Schneider said Yinlu is trying to shift to products such as ready-to-drink coffee as its main category, peanut milk, declines in popularity.

In an interview with Bloomberg TV, Schneider signaled Nestle had an appetite for purchases after last year was “light on the acquisition front.”

The company has made more than 50 deals over the past three years, selling and buying assets that have revenue of about 12% of its total sales. Schneider said he expects a similar amount over the next three years.

Nestle could raise funds for an acquisition by selling its stake in French cosmetics company L’Oreal SA, Schneider said, declining to say when it could happen.

The company reached its target for margin improvement one year early, thanks to cost-cutting. 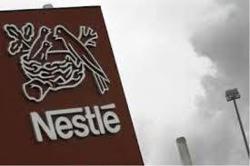 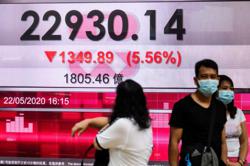