expects 2020 to be a positive year for the stock market, on the back of stronger private consumption, positive economic growth and the implementation of the government’s various expansionary measures.

Chief executive officer Datuk Muhamad Umar Swift, however, noted that 2019 was a challenging year for the stock market and admitted that the market had gotten off to a rocky start this month in light of the coronavirus outbreak.

“We see strong, robust consumption but that all depends on our economy. We’re looking at 4%-plus gross domestic product growth and when you take into account the recent 25 basis points lending rate cut, that will translate into expansion and support the property market, which will be a positive.

“The East Coast Rail Link is moving forward, Bandar Malaysia is coming back online, spending is happening and those investments will augur well, ” he said at a media briefing on the stock exchange operator’s 2019 earnings yesterday.

Commenting on the coronavirus outbreak, which has created much volatility in the market recently, Umar is optimistic that the epidemic will not subdue the market over too long a period.The coronavirus, that’s an imponderable. People wonder what the impact will be. They’re comparing it with SARS. Rubber glove stocks are up. But people need to make their own judgment as we look at this outbreak.

“But necessary work is being done. We’ll see a clear patent developing over the next four-to-six weeks and then we’ll know what the impact will be to the world economy. We’ve seen the markets react quite strongly, ” he said.

On the outlook for initial public offerings for this year, Umar said Bursa Malaysia is targeting 40 listings for 2020.

Bursa Malaysia’s net profit for its fourth quarter ended Dec 31,2019, dropped to RM45.56mil from RM51.86mil in the previous corresponding period, due to lower segment profits recorded during the quarter. 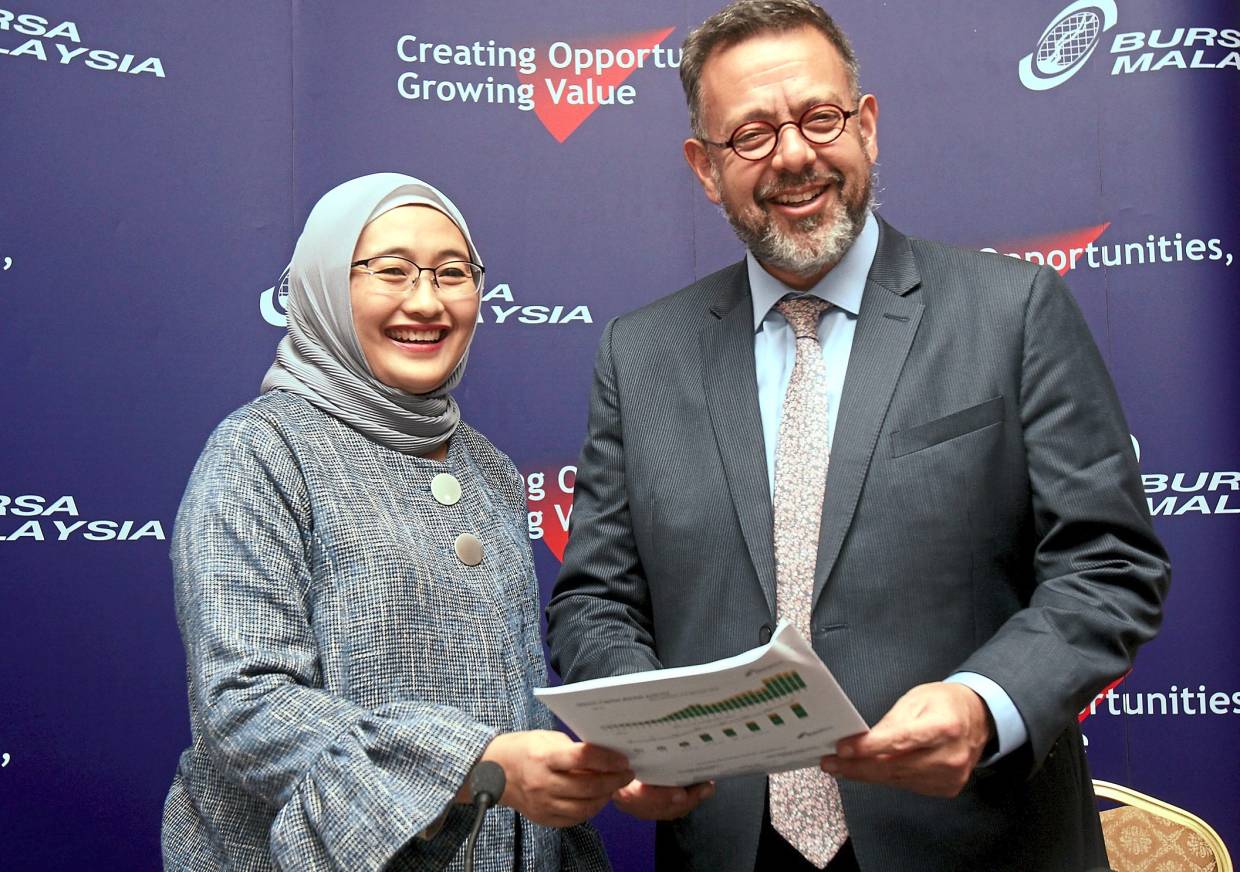 In a filing yesterday, the stock exchange operator said revenue during the fourth quarter was flat at RM129.33mil from RM128.92mil a year earlier.

Umar said Bursa Malaysia is allocating RM30mil for capital expenditure this year, adding that the stock exchange operator will be focusing on growing its non-trading revenue.

“Trading revenue is market predominant. We want to diversify and one of the efforts is to improve the derivatives business.

“It was flat last year. What we’re seeing is greater volatility in the market and we want to introduce more products. Reactively we’ll engage and bring in participants from offshore and we’re quite excited about what can be done, ” he said.

For its financial year ended Dec 31,2019, Bursa Malaysia’s net profit fell to RM185.86mil from RM224.04mil in the previous corresponding period, while revenue dipped to RM502.49mil from RM550mil a year earlier.

“Total operating expenses in 2019 increased by 2% to RM246.2mil from RM241.3mil in 2018 mainly due to higher marketing and development expenses as the securities and derivatives markets continued with their focus on marketing and engagement initiatives to attract new participants and broaden the trading community, ” Bursa Malaysia said in a statement yesterday. There was also a recognition of a one-off impairment loss allowance of RM3.3mil on computer software.

The stock market operator also approved and declared a final dividend of 10.4 sen per share for 2019 amounting to approximately RM84.1mil, which will be paid Feb 28,2020.

It said the securities market performance in 2019 continued to be influenced by global and domestic developments, such as the continued concern over the geopolitical tensions and soft domestic corporate earnings.

Bursa Malaysia added that trading velocity decreased by four percentage points to 28% in 2019 compared with 2018.

“Meanwhile, non-trading revenue for the securities market decreased by 1.2% to RM139.4mil in 2019 from RM143.7mil in the previous financial year, mainly due to lower listing and issuer fees and perusal processing fees earned in 2019 which was attributed to the lower number of corporate exercises and circular submissions respectively.

“However, this was partially offset by higher market data revenue, underpinned by the continued growth in subscriptions in 2019.”

As for the Islamic capital market, Bursa said ADV for Bursa Suq Al-Sila (BSAS) grew by 25.5% to RM30.6bil in 2019 from RM24.3bil in the previous corresponding period.

“Despite the growth in ADV, trading revenue for BSAS in 2019 decreased by 6.3% to RM14mil from RM14.9mil in 2018, mainly due to volume-based pricing. Trading on BSAS is expected to sustain its growth momentum through further system improvements as well as the continuous onboarding of new domestic and foreign participants onto its platform.”