has made a roaring start to 2020 with its oil and gas subsidiary, OceanMight Sdn Bhd, winning two contracts for the fabrication of offshore structures worth a combined RM270mil last week.

The first contract from Petronas Carigali Sdn Bhd is for the provision of engineering, procurement, construction, commissioning and installation of wellhead platform for BKD-A and Host Tie-in modification at BNCPP-B topsides – Bakau non-associated gas development project.

The contract period is 19 months.

OceanMight was awarded another contract by PTTEP Sarawak Oil Ltd for the provision of EPCC of Pemanis Satellite (Pesa) topside for its SK309 development. The project’s execution period is 11 months.

The acquisition included five petroleum exploration and production projects located in shallow and deepwaters off Sarawak and Sabah. They are the Sabah K project, SK309 and SK311 project, Sabah H project SK314A project and SK405B project.

The Sabah K project and the SK309 and SK311 project are in the producing phase while SK314A and SK405B project are under exploration campaigns.

“The combined worth of the Petronas Carigali and PPTEP contracts is around RM270mil, with progressive billings from January 2020 until the first half of 2021, ” KKB group executive director Kho Pok Tong told StarBiz.

OceanMight is one of the few Petronas-licensed yards in Malaysia that have been awarded the Petronas frame agreement for the provision of engineering, procurement and construction of fixed offshore structure works for six years commencing Dec 12,2018.

The agreement enables OceanMight to bid for fabrication works until 2024.

Kho said OceanMight is expected to complete another contract – provision of procurement and construction of wellhead deck, piles and conductors for the Pegaga development project for Sapura Fabrication Sdn Bhd in first quarter 2020.

The contract is part of Sapura Fabrication’s engineering, procurement, construction, installation and commissioning for the Pegaga development project (Mubadala Petroleum).

According to Kho, KKB is due to complete and commission a mega workshop under an expansion project of the group’s oil and gas fabrication yard along Jalan Bako, Kuching.

Up to RM25mil has been allocated to fund the expansion undertaken in anticipation of more fabrication jobs for offshore structures.

When operational, the covered mega workshop with building height of 50m can accommodate multiple projects up to 18,000 tonnes per annum of works to be carried out simultaneously.

The new workshop will be equipped with an overhead heavy lifting equipment, state-of-the-art machinery and automation.

Kho said KKB group has a current order book of RM818mil, including a work package of Pan Borneo Highway project, for completion in stages until first half 2022.

“Our tender book is about RM242mil, ” he said, expecting the outcomes of its bids for contracts to be known in first half 2020.

He said the group would continue to tender for contracts under Sarawak’s billion-ringgit state water grid programme, infrastructure works under the state-funded Sarawak coastal road and second trunk road projects and the supply of steel water pipes.

Upbeat about the market outlook for 2020, Kho described it as “positive” for KKB. 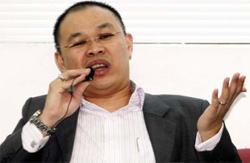