“It is a huge relief that the palm prices have rebounded from their low levels from the last financial year (FY) ended Sept 30,2019, to a high of above RM2,800 per tonne for CPO, as production costs have risen over the years quite substantially, ” KLK chairman Raja Muhammad Alias said.(File pic shows KLK oil palm plantation.)

PETALING JAYA: The strong recovery in crude palm oil (CPO) prices in the last quarter of 2019 may have improved prospects, but Kuala Lumpur Kepong Bhd

(KLK) is not resting on its laurels.

The plantation group said it would focus on improving operational efficiencies to drive future performance.

“It is a huge relief that the palm prices have rebounded from their low levels from the last financial year (FY) ended Sept 30,2019, to a high of above RM2,800 per tonne for CPO, as production costs have risen over the years quite substantially, ” KLK chairman Raja Muhammad Alias said.

“Our priority remains geared towards the twin objectives of increasing both yields and labour productivity. Progress has been made, albeit slowly, but we envisage that our continuing efforts will bear fruit in coming years, ” he noted in the company’s recently released annual report.

KLK noted CPO prices had in recent months improved significantly with the expectation of shrinking supply in the wake of the ambitious biodiesel programmes roll-out by Indonesia (B30) and Malaysia (B20) as well as the anticipated lower fresh fruit bunch (FFB) production. These factors gave support to the current high price levels of more than RM3,000 per tonne, compared with less than RM2,000 per tonne just six months ago.

“These proactive moves have generated a huge internal demand and together with the anticipated slower growth in supply, have been instrumental for well-supported palm prices, ” Raja Muhammad Alias said.

Nevertheless, KLK noted the recent rebound of palm products prices could pose a challenge for the group’s oleochemical division, as there could be further margin squeeze in view of overcapacity and preferential European Union duty exemption to Indonesian players. It noted the need to ensure operational efficiencies were well sustained, as more capacities come onboard during FY2020.

“Our oleochemical operations, despite the current higher feedstock prices and uncertain market environment, should continue to perform satisfactorily through operational efficiencies and our higher margin products, ” he added.

Meanwhile, in its annual report, KLK conceded that its efforts in the plantation segment to mechanise most of its estates had yet to produce the desired results in improving productivity. It said the delay in equipment and machineries delivery had since been resolved, and the group would monitor the full impact on productivity of the mechanisation programme.

KLK also said it would continue to monitor its standards of replants to achieve its FFB yield target of 20 metric tonne per hectare (mt/ha) in the first year of harvesting.

It remained hopeful that in FY2020, the group would be able to see these efforts come to fruition as initial yields in some of the areas planted in FY2015 had started producing more than 20 mt/ha. 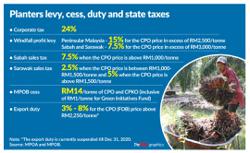