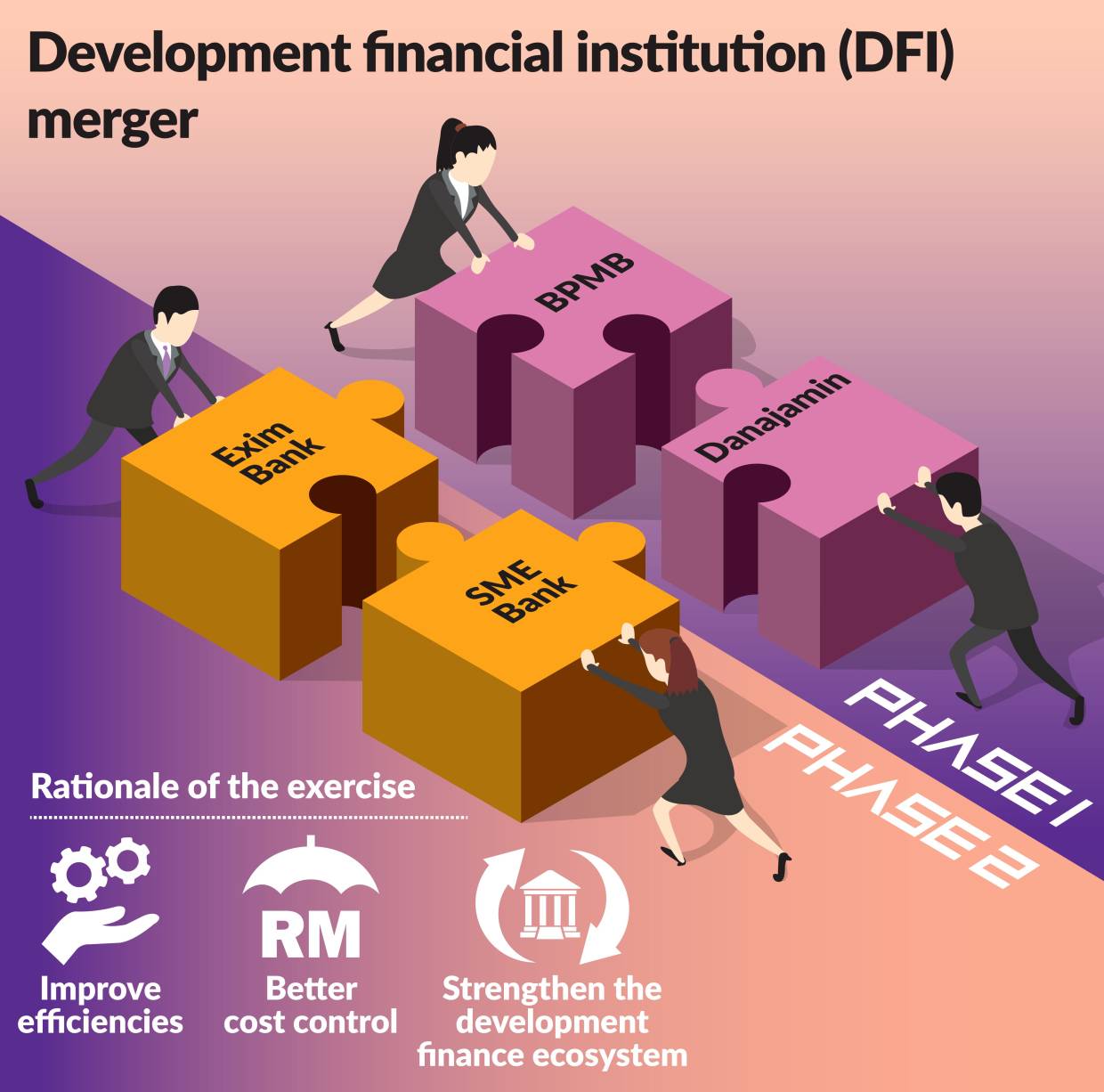 BPMB in a statement said that negotiations between the two DFIs are expected to be completed within six months from Bank Negara’s approval.

The first phase of the restructuring plan will involve the merger of BPMB with Danajamin, and the second phase to merge Exim Bank and SME Bank into the earlier merged entity.

The smooth implementation of the restructuring plan would be overseen by a steering committee, led by the Finance Ministry.

The steering committee consists of representatives from Credit Guarantee Corp Malaysia Bhd, Bank Negara and the four DFIs, as well as relevant stakeholder ministries including the Economic Affairs Ministry, the Entrepreneur Development Ministry and the International Trade and Industry Ministry.

Meanwhile, a working committee, which would provide updates on the merger progress, would also support the steering committee in driving the implementation of the key integration aspects of the merger.

Given the expected merger of the four DFIs, a banking analyst from Kenanga Research told StarBiz that the merger is expected to largely tap the financing for entrepreneurs as well as SMEs, driven by BPMB’s mandate to provide medium and long-term financing to the strategic sectors of the economy.

“Right now, getting financing for the SME sector is tough, given the weak business sentiment.

“However, this merger would extend its financing to the SME business which is a big market as it faces difficulty in getting financing from conventional banks, ” he added.

As of Dec 31,2018, BPMB had a combined asset value of RM24.7bil, reflecting that the group is well-positioned to meet the financing and business development needs of Malaysian businesses in the priority sectors.

With the global economy slowing down, the analyst noted that merging Danajamin could be useful in the merger, as the bank would be able to capitalise the banking system should there be a rise in non-performing loans, moving forward.

“This merger would strengthen the capital adequacy ratio, so it can continue to expand its lending to the SME sector and unsecured businesses, ” he added.

The government’s proposal to merge four DFIs in the country could create an entity with a larger balance sheet that, in turn, could result in greater efficiencies and better cost controls.

However, with these institutions serving different mandates, the operational side would be something that the government would need to address, according to industry players.

Another likely issue that could crop up with the proposed merger is staffing, where there will bound to be duplications and overlaps in some operations, post-merger.

Finance Minister Lim Guan Eng said in his Budget 2020 presentation that DFIs played an important role as public institutions that support the nation’s development goals and serve the needs and requirements of the new economy.

The possible merger of local DFIs in Malaysia’s already crowded and competitive banking space had been discussed sometime back, but did not take off.

Previously, in a statement issued by BPMB, it said that the proposal to strengthen the DFI eco-system is a “positive development.”

“Our business lines are complementary to the other institutions, and the proposal will lead to greater synergies that would benefit all stakeholders, as well as fulfil the needs of the new economy, ” it added.

DFIs in Malaysia were established in the 1960s and 1970s as specialised financial institutions with specific mandates to develop strategic sectors, spanning agriculture, infrastructure, SMEs, as well as export-oriented and high-technology industries.

Notably, in 2008, SME Bank was made a separate entity from its parent company, the BPMB group.

Last year, Bank Negara collaborated with the World Bank and DFIs to develop an enhanced performance measurement framework for DFIs.

The central bank said it sought to provide a sharper focus in the mandates of DFIs, while optimising performance and synergies.

It aims to capture the broader contributions of DFIs by moving beyond the narrow focus of financing growth indicators, and integrating developmental key performance indicators to measure the socio-economic impact of DFI operations.