The main contributors of the drag are: (1) weak ISM November Manufacturing PMI, which read at 48.1 from 48.3 in October (cons: 49.2) due to poor new orders and employment; (2) trade tension with US President Donald Trump having reimposed tariffs on steel and aluminum from Brazil and Argentina due to their weak currencies against the US dollar; (3) renewal of tariffs hike threats on China with the willingness to increase tariffs by additional 15% on around US$156bil worth of Chinese goods on Dec 15 if there was no deal reached; (4) Trump jawboning the Fed again to cut interest rates further to weaken the dollar; (5) prospect of a trade deal with China might not be accomplished until after the 2020 presidential election; (6) weaker-than-expected November ISM non-manufacturing PMI which came in at 53.9 from 54.7 in October (cons: 54.5); and (7) reversal in risk sentiment following a report that a phase-one US-China trade deal remains at work. 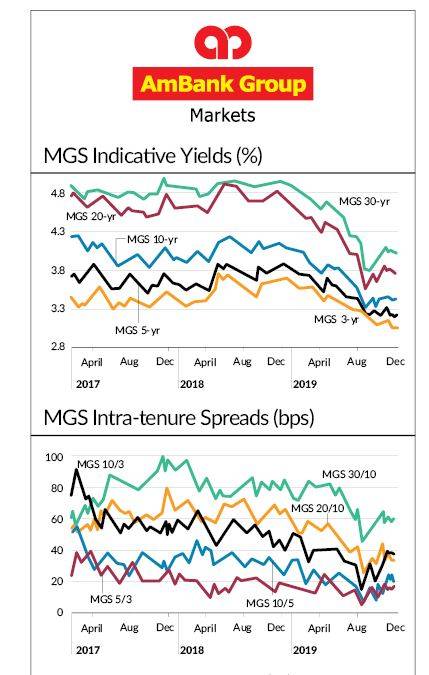 Investors also remained optimistic about prospects for a US-China trade deal despite a looming deadline for the imposition of fresh import tariffs by Trump.

Brent crude price gained 1.5% to US$63.39/bbl fuelled by: (1) lower-than-expected crude inventories for the week ending Nov 29 at 4.9 million barrels (cons: -1.7 million) as reported by the EIA; and (2) hints of deeper production cuts from Opec in 2020. Traders are awaiting Opec’s decision on its production policy at least for the 1Q2020. The anticipated decision will be announced during the ongoing meeting in Vienna which will wrap up on Dec 6.

The euro rose 0.8% to 1.110 due to the better-than-expected Markit EU Manufacturing PMI data which came in at 46.9 in November from 45.9 in October (cons: 46.6) while shrugging off Trump’s fresh tariffs threats on France – threatening to slap tariffs on US$2.4bil worth of wine, cheese, handbags, cosmetics, and other French exports.

The pound surged 1.8% at 1.316 on increasing expectations that the Conservatives will achieve a majority in the upcoming elections while offsetting the falling November Markit Manufacturing PMI at 48.9 from 49.6 in October (cons: 48.3).

Key data released during the week includes the Markit/CIPS November services PMI at 49.3 from October’s 50 (cons: 48.6).

With just one week until the UK’s general election, Britons are biting their nails as the possible Brexit’s impact could either make or break the economy.

The yen strengthened 0.7% to 108.8 on the back of a rise in safe-haven assets and a stronger-than-expected November Jibun Bank Manufacturing PMI coming in at 48.9 from 48.4 in October (cons: 48.6) and a weaker dollar.

The majority of Asian ex-Japan currencies appreciate on the weaker dollar and optimistic US-China trade narratives. The Indian rupee was the outperformer during the week, gaining 0.6% to 71.29, followed by the Singapore dollar that rose 0.5% to 1.361. The South Korean won fell 0.7% to 1,190.

The US Treasuries experienced some buying pressure across the spectrum – rising 1.9 basis points (bps) on average save for the UST2Y owing to: (1) trade tension with Trump having reimposed tariffs on steel and aluminum on Brazil and Argentina due to their weak currencies against the USD; and (2) the renewal of tariff hike threats on China with the willingness to increase tariffs by additional 15% on around US$156bil worth of Chinese goods on Dec 15 if there was no deal reached. Aside from that, the US president has jawboned the Fed again to cut interest rates further to weaken the dollar.

Selling pressure was felt when the MGS segment rose 0.5–3bps, save for the 7Y yield that eased 2bps during the week.

The IRS curve was seen largely higher save for the one-year tenure, easing 0.5bps to 3.250%.