Mohd Nageeb: The palm oil industry is just about to recover from weak CPO prices and has suffered in terms of low profits and even losses over a period of time.

PLANTATION companies in Malaysia are now in a bittersweet position.

Meanwhile, CPO futures prices (KO3) have exceeded RM2,700 per tonne. For perspective, the futures price range have remained well below RM2,400 per tonne since mid-2018, until it breached the RM2,500-mark this month.

The stronger prices, which is a relief to the planters’ top line, together with expectations that CPO export duty exemption may be extended into 2020, have re-ignited interest in the commodity-based stocks.

To be sure, plantation stocks are seeing the best run in 12 months.

Bursa Malaysia’s Plantation Index, which has staged a downtrend beginning mid-February this year, has jumped by over 6% since October.

Several plantation counters have outperformed the index, with strong surge in share prices over the last one month. This includes FGV Holdings Bhd and SARAWAK OIL PALMS BHD

which have risen by about 44% and 54% respectively in only eight weeks’ time. 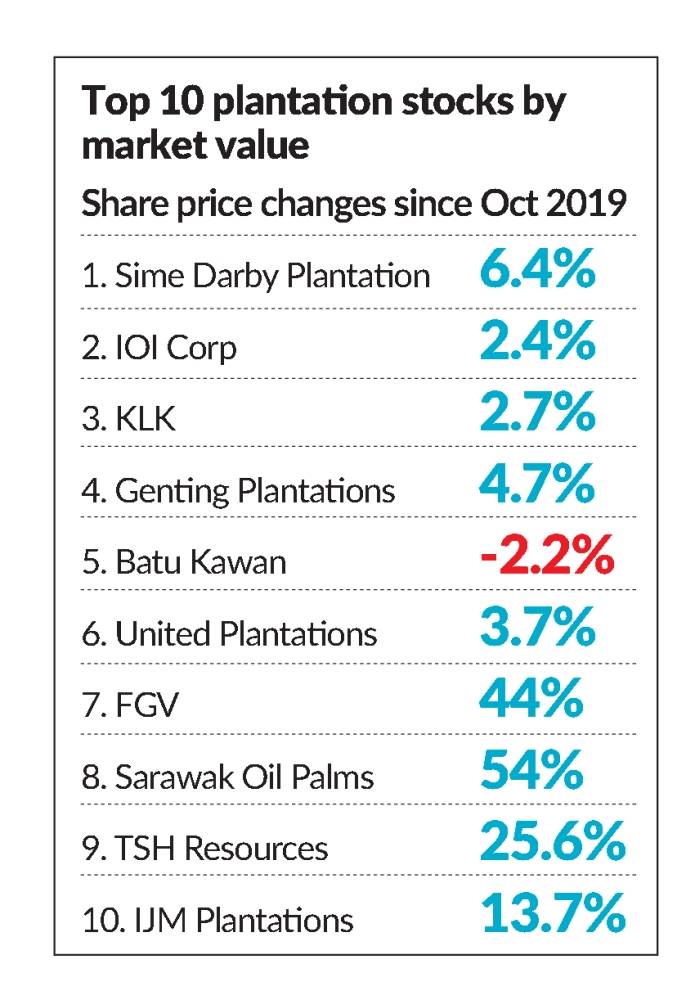 While the recent rally in CPO prices is positive for the industry, the Malaysian Palm Oil Association (MPOA) is worried about a windfall profit tax (WPT) that could potentially be imposed on oil palm planters.

At present, once the CPO price reaches the threshold of RM2,500 per tonne or above, Peninsula-based oil palm plantation companies would be imposed a 15% WPT. For planters in Sabah and Sarawak, the threshold is set at above RM3,000.

“If ever the WPT is to be retained, the threshold should be increased from RM2,500 to RM3,000 per tonne for Peninsular Malaysia and from RM3,000 to RM3,500 per metric tonne for Sabah and Sarawak.

“The whole proceeds should be channelled back to the industry and managed collectively solely for the industry needs,” he says in a statement issued yesterday.

He adds that the palm oil industry is just about to recover from weak CPO prices and has suffered in terms of low profits and even losses over a period of time.

“To manage this, most plantation companies have resorted to cutting fertilizer applications notwithstanding the ever increasing cost of production. Coupled with that, the dry spell experienced earlier this year is going to have an effect on yields in 2020.

“The smallholders are basically the group that has suffered the most and shall not be enjoying the better prices as a result,” he points out.

The amount will be an addition to the RM13 that industry players are already paying, on top of the various levies and taxes that have been imposed on them.

It is yet to be known whether the government will delay or suspend the WPT. But the imposition of the tax could eat into the margins enjoyed by the oil palm planters, which have improved following the higher CPO prices.

The rally in CPO prices is largely driven by panic buying due to concerns of a potential palm oil supply shortfall, caused by slower output growth and rising biodiesel demand.

Although CPO price recovery have begun since July, the momentum picked up from mid-October.

A major reason is palm oil stocks have been falling earlier than expected. In fact, Malaysia’s palm oil stocks posted the first month-on-month (m-o-m) decline in October stockpile since 2011, down by 4% m-o-m to 2.35 million tonnes.

According to CGS-CIMB Research head of agribusiness Ivy Ng, the October stockpile was 5% below her projection of 2.48 million tonnes. Meanwhile, it was 8% below the Bloomberg forecast of 2.54 million tonnes.

Ng said in a note on Nov 11 that the reduced production could likely be due to lower fertilisers applied by farmers a year ago and the start of the low production cycle for Malaysian palm oil.

“Our palm oil production forecast for the full year projects output for Nov-Dec 2019 to fall 9% yoy.

“We project palm oil stocks to fall 3% mom to 2.28 million tonnes at end-Nov 2019 as consumption and exports are projected to trump production and imports. We expect November palm oil output and exports to fall 5% m-o-m as production may have peaked in October.

The improvement in CPO prices will be reflected positively on the oil palm planters’ financial results, moving forward.

“Prevailing CPO and palm kernel prices have improved. In view of this, the performance of plantation segment for FY20 is expected to be better,” the company said in its latest results filing.

Bhd believes that the implementation of biodiesel mandates of B20 and B30 in Malaysia and Indonesia respectively would tighten global palm oil supply in 2020.This is amid the anticipated lower fresh fruit bunch yield trend caused by the dry weather conditions and haze experienced during the year as well as cut back of fertilizer applications by some planters due to low palm oil prices in recent years.