According to a statement by the central bank, Fraziali(pic) had served in the economics and monetary policy departments.

According to a statement by the central bank, Fraziali had served in the economics and monetary policy departments.

Bank Negara also announced the retirement of assistant governor Donald Joshua Jaganathan after 36 years of service with the central bank.

Prior to his appointment as assistant governor in 2011, he had served in a number of areas, including in banking and insurance regulation and supervision, financial surveillance, strategic management and finance.

Jaganathan also played an instrumental role in driving various talent development initiatives in the financial industry, including the Asian Institute of Chartered Bankers and the Asian Banking School.

“The bank would like to record its utmost appreciation to Jaganathan for his contributions and wishes him all the best in his future endeavours, ” it said. 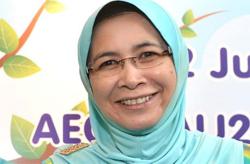