has set aside between EUR50 to EUR60 million (approximately RM230 to RM280 million) to construct a new 60,000 metric tonne (MT) cocoa grinding facility in a West African country, Cote D'Ivoire.

Its group managing director and chief executive officer Brandon Tay Hoe Lian said the new facility would see GCB operations expand to a major cocoa bean producing country and at the same time allow the group to grow its Europe market presence due to the close proximity and similar time zone.

"We would benefit from improved cost competitiveness through savings in shipping costs, storage and handling, as well as export taxes.

"These factors would further strengthen our competitiveness and capabilities, thus enabling us to improve sales to the rest of the world, as well as enhance our reputation as one of the biggest cocoa ingredients producers in the world, ” he said in a statement, today.

The new factory is expected to be commissioned in the first quarter of 2021, which would

The investment into its West African facility will be funded via combinations of internally generated funds, bank borrowings, and proceeds from Guan Chong’s recently completed private placement. - Bernama 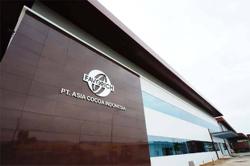 Lower export earnings from cocoa seen due to virus More waste expected to be generated during Raya