Lee: The FDI momentum in the second half of 2019 is expected to slow down compared to the first six months

PETALING JAYA: Experts believe Malaysia’s foreign direct investment (FDI) momentum will continue to pick up in the upcoming quarters, following the rise in the country’s realised FDI by nearly RM11bil or 68.4% year-on-year (y-o-y) in the first six months of 2019 (6M19).

According to Fitch Solutions Macro Research, the resumption of China-backed projects in Malaysia and the relocation of companies to Malaysia due to the US-China trade war would likely bring more direct investment into the country.

“There is further upside risk from the possibility of other projects being resumed, such as the Kuala Lumpur-Singapore high-speed rail, especially if the government manages to decrease its high public debt load to what it deems a sustainable level, ” it said.

The research firm also added that the stronger FDI would continue to reduce Malaysia’s vulnerability to outflows.

“The degree of Malaysia’s vulnerability has been reduced, with direct investment making up a larger part of the country’s international liabilities since the first quarter of 2018.“Over the same period, the share of liabilities in the ‘other investment’ category, which in Malaysia’s case is typically comprised of bonds and other forms of liquid securities, has fallen, ” said Fitch Solutions in a note yesterday.

“Typically, it would take about 16 to 18 months for the approved FDI to be realised or really invested in the country.

“As we have seen a strong increase in approved FDI last year and so far this year, we can see a similar momentum in realised FDI moving forward, ” he said.

A quick check on the Malaysian Investment Development Authority’s website showed that the country’s approved FDI in 2018 surged 48% to RM80.5bil, up from RM54.4bil in 2017.

For perspective, the 2018 approved FDI was an all-time-high, even as global FDI figures dipped to the lowest levels in a decade.

Lee, however, expects the FDI momentum in the second half of 2019 to slow down compared to the first six months.

“Malaysia’s realised FDI in 6M19 saw strong growth particularly because of the first quarter, mainly due to Khazanah Nasional Bhd’s sale of its 16% stake in IHH Healthcare Bhd

“What we saw in the first quarter was a one-off factor. We may not see a similar purchase by foreign parties in the second half, therefore I expect a lower FDI in the second half of 2019. But this will improve as we go into 2020, ” he said.

Meanwhile, AmBank Group chief economist Anthony Dass said that the appetite for FDI would remain, with the government maintaining a business-friendly approach to attract investment and create quality jobs for all Malaysians.

When asked about the government’s move to divest its stake in government-linked companies (GLCs) to foreign companies, Dass said it would depend on the foreign buyers’ willingness to pay for a higher price for stakes in GLCs.

Finance Minister Lim Guan Eng had said previously that the government would begin monetising some of its non-critical and non-strategic assets to further strengthen its cashflow.

The asset monetisation includes the sale of shares, land, and leasing of idle government assets and buildings.

The sale of Khazanah’s 16% stake in IHH Healthcare was part of the asset-monetisation plan. 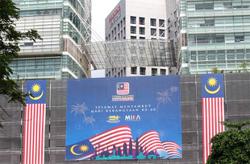