LSS2 problems: A file picture showing a 20MW solar farm at Ladang Byram in Nibong Tebal, Penang. About 70% of the 563MW total LSS2 capacity awarded may be delayed or could even fail to commission altogether, according to industry officials familiar with the matter.

SOME companies awarded large scale solar schemes (LSS2) last year are unable to take off with their plans that is still on the drawing board due to financing and land-related issues.

About 70% of the 563MW total capacity awarded may be delayed or could even fail to commission altogether, according to industry officials familiar with the matter.

“Many successful bidders under the LSS2 are not able to carry out the solar projects simply because most banks only want to give 70% financing at best. In comparison, conventional power plants can get up to 95% financing. So, LSS2 operators have to fork out more capital on their own and this can run into multi million ringgit,” says a source.

A banker when contacted confirms that there are limitations when it comes to financing of solar power plants.

The bank completed Malaysia’s first syndicated green project financing earlier this year for a large-scale solar plant, in Bukit Keteri, Perlis, “We have seen solar players having difficulties providing equity commitment due to internal disagreements amongst the sponsors, conditions subsequent on land matters under the financing agreement not being fulfilled as well as project cost overruns due to certain loopholes in the engineering, procurement and construction (EPC) contracts which resulted in completion delays.

“The other issue concerning specifically the loan market is the scarcity in the funding limit for solar projects. This is due to the single customer limit constraints given that most of the financiers would already have existing large exposures to Tenaga Nasional Bhd

which would need to be aggregated with any exposure to the solar players, as required by Bank Negara.

“Financiers tend to be very selective in providing long term project financing and may also require higher equity commitment from the sponsors to reduce the debt funding amount and shorten the financing tenure. As for the bond market, the maximum capacity of 30MW for each power plant under LSS2 resulted in relatively small funding size to be raised from the bond issuance which does not bring the economies of scale to the solar players,” says Tan.

However, she commended the decision by the Energy Commission to increase the maximum capacity for each solar power plant up to 100MW under the Cycle 3 of the large scale solar scheme (LSS3).

Tan points out that this would help ensure economical size for project sponsors and enable a better access to the bond market for long term fixed rated funding to match project cash flow dynamics.

“Given that the current low interest rate environment is anticipated to continue at least until the first half of 2020, we expect to see the bond market being the preferred funding option for successful bidders under LSS3,” says Tan.

Solar tariff pricing The tariffs under LSS2, which was decided based on a competitive bidding in Aug 2017, are lower than the first cycle. This is understandable as the cost of solar technologies has continued to decline.

In the past decade alone, solar panel prices have dropped by more than 70%, according to MIDF Research.

An industry observer, however, says that the drop in solar panel prices is of little help for the plant operators.

“Of course, solar panel prices have reduced but it is usually only about 40% of the total costs of solar power generation. Another 40% of the cost is from land and sub-station, while the last 20% is for transmission line.

“And then, you have the maintenance costs which will increase over time due to degradation of the solar facility. Inefficiency starts to seep in after three years, although the concession period is for 21 years.

“Banks will take all these into consideration. So, after incorporating all these costs, many of the LSS2 projects are found to be not feasible,” a source says.

OCBC Bank’s Tan says that lower tariff for solar-based electricity could eventually affect the overall project’s internal rate of return (IRR) and its financing feasibility, especially since the average construction cost has not seen a significant reduction since the inception of solar projects in the country under LSS1.

“Solar players may resort to cheaper alternatives for equipment to reduce the project cost which would then compromise on the energy production ability of the power plant in the long run.

“It is essential to have a balanced approach in determining the tariff for solar projects to ensure appropriate return on investment to project sponsors,” says Tan.

Industry experts who spoke to StarBizWeek say that land costs for solar projects in Malaysia are usually high.

A solar plant of 1MW capacity would generally require about 3.5 - 4 acres of land.

Aside from land-related costs, solar plant operators will also have to bear the transmission costs to deliver the generated electricity into the sub-stations and up until the grid.

“Operators can build their solar facility on cheaper lands, but these lands are usually further away from the main electricity grid. So, the transmission cost will also be very high and there will be power loss as well.

The LSS2 was originally tendered under the previous Barisan Nasional government only for a capacity of 460MW, but was later increased to about 563MW due to strong interest from the industry players.

Meanwhile, the bidding for LSS Cycle 3 was opened in Feb 2019, with a total of 500MW capacity expected to be awarded. LSS 3 projects are targeted to reach COD in 2021.

Among the companies involved in LSS2 is Cypark Resources Bhd

. The company is the turnkey EPCC contractor for three projects under LSS2 namely a ground mounted solar plant in Sik, Kedah and two floating solar plant in Negeri Sembilan.

When contacted, a Cypark spokesman says that the EPCC contracts are currently in progress and are expected to meet the targeted COD by December 2020.

“The projects are viable with a tariff rate of 37 sen/kWh and the payback period for the projects are similar to industry standards. As Cypark is currently regarded the largest local turnkey EPCC, it is envisioned that it will continue to secure more success in future LSS,” he says.

Asked about the mode of financing for the three projects, the spokesperson says that it will be funded by a rated SRI sukuk Murabahah that has been assessed at AA3 rating.

Solarvest Holdings Bhd, which is en route to an Ace Market listing in Oct this year, is also involved as EPCC contractors in four solar projects under LSS2 totalling 40MW .

According to managing director Lim Chin Siu, the company’s projects are progressing as per schedule.

“Three of the projects in Perak are expected to be operational by the end of the year. The fourth one is in Selangor which is still in the early stages of construction.

“For all our projects under LSS2, the tariffs are above 38 sen/kwh which is lower than the LSS2 reference price of 41 sen/kwh. This translates to a double digit IRR to the owners of these solar projects.

“We believe that the government is moving in the right direction in developing the local solar sector. The LSS1 and LSS2 gave Malaysian EPCC solar contractors the opportunity to gradually strengthen their technical capabilities and project experience.

“The government’s initiative that all EPCC contractors under LSS3 must be 100% local is timely as the country has now built up a pool of competitive local contractors with the relevant and capable expertise,” says Lim. 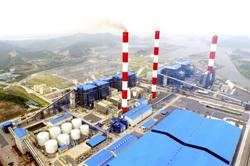