AN intense four-month courtship to create a pan-Asian telecoms giant has ended in a break-up rather than a marriage.

and Norway’s Telenor Group was first announced in May.

Interestingly, new suitors for Axiata are already knocking on its door. One big telco name is making an offer for Axiata’s Indonesian business at a price higher than what it was valued at in the Axiata-Telenor structure. Another giant, likely from China, is very keen on Axiata’s South Asian assets, namely, Sri Lanka and Bangladesh.

This is besides the earlier offer that had been made by an undisclosed party keen to buy into Axiata’s tower assets at a US$3bil valuation price tag. The question is, will Axiata want to look for new suitors so soon after the collapse of talks with Telenor, or prefer to stick to business as usual?

Yesterday afternoon, both companies announced to their respective exchanges that they had mutually decided to end the discussions for the mega-merger of their telecoms assets in Asia. 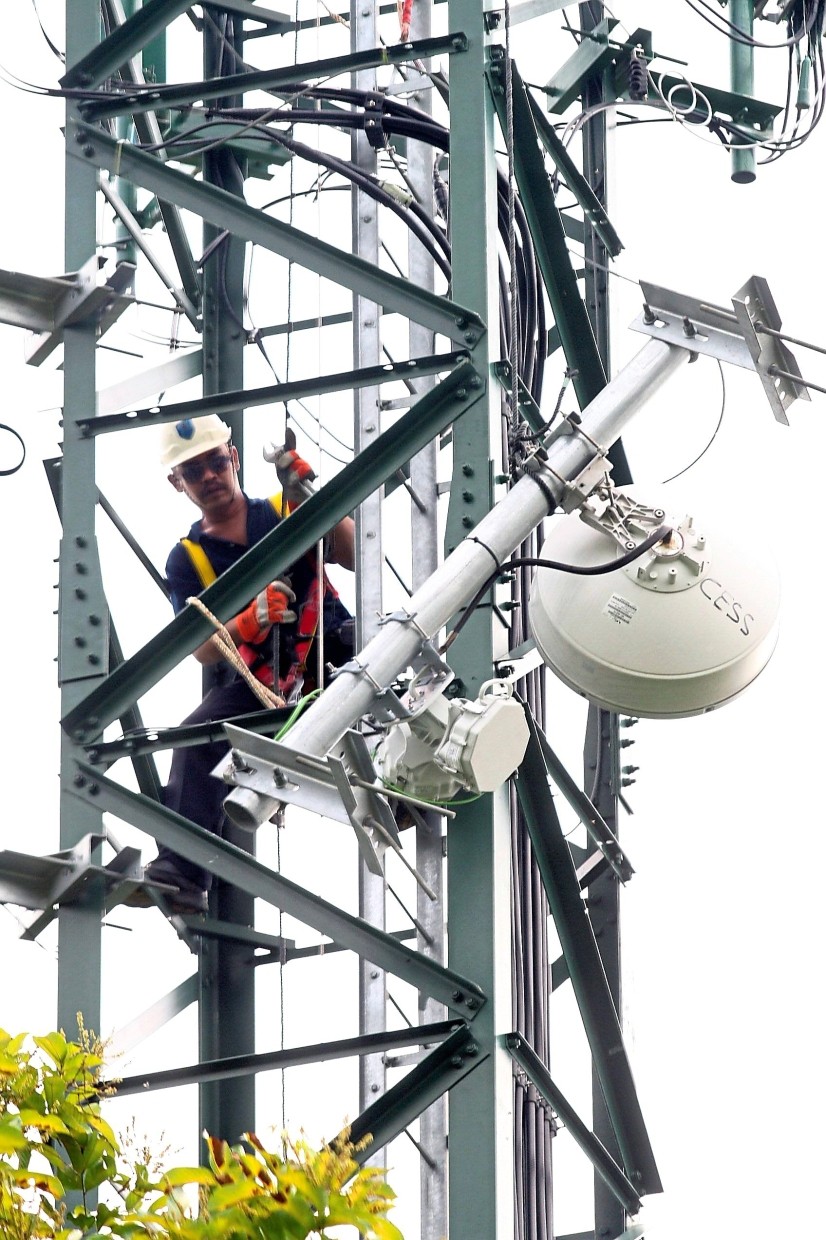 “Both parties have been working on due diligence and finalising the transaction agreement to be completed within the third quarter of the year, but due to the complexities involved, we have decided to mutually end the discussions, ’’ Axiata said in a statement.

Axiata added that both parties still acknowledge the strong strategic rationale for the merger and do not rule out that a future transaction could be possible.

It is understood that both Telenor and Axiata executives had decided not to pursue the merger earlier this week. However, it was not until Thursday night when both Sigve Brekke, the CEO of Telenor, and Tan Sri Jamaludin Ibrahim, Axiata’s group CEO, finally made the call that the deal was off due to insurmountable complexities.

Sources say Axiata’s board had a meeting on Friday morning regarding the issue. That was followed by a phone conversation between Jamaludin and Brekke to finally make the decision to end it all.

After the announcement to Bursa Malaysia, Jamaludin conducted a town hall at Axiata Tower to tell the employees about the “no deal”.

At the same time, a similar town hall was held at the Celcom Axiata Bhd office and this was conducted by its CEO, Mohamad Idham Nawawi.

It is learnt that Digi.com Bhd

announced the collapse of the deal electronically to its employees.

Interestingly, when Jamaludin and Idham announced to the employees that the deal was off, there was a sigh of relief among many. “It is such a relief to so many of the employees from the various companies involved, as for months, they have been worried about job cuts despite repeated assurance that there will be none, ’’ says a source.

On Thursday, StarBiz in an article reported that “all indications point to the merger being called off.”

The shares of the three companies fell on Thursday, with Axiata shedding 23 sen and Digi, eight sen. Axiata recovered by 11 sen yesterday to close at RM4.88, while Digi only shed one sen to end the week at RM4.89. Over the last two days, Telenor’s shares, listed on the Oslo exchange, fell by some 5% or close to 10 Norwegian krone to 177.2 at the time of writing.

“It was such a huge merger and now that it has fizzled out, the share prices are bound to take a hit, ’’ says an analyst.

“The deal had its merits. The question is, can there be another deal as good as this?’’ asks one industry executive. Size and scalability are essential with the digital evolution and even the biggest of players will need to collaborate to fight competition. The future fight is also no longer about scale and price-slashing, but about providing good user experience.

“Telenor had the expertise and Axiata the markets. It would have been a good fit, ’’ says another industry executive.

Analysts covering Axiata and Digi had been mostly bullish about the merger.

It all began on the afternoon of May 6 at a hurriedly called press conference at KL Hilton. Jamaludin and his entourage of consultants and bankers walked into a packed room of eager journalists and company executives followed by Telenor’s Brekke.

Both CEOs were all smiles as they had hatched the deal of the century that was meant to transform their companies into bigger giants.

Both Jamaludin and Brekke had been talking about the possibility of a collaboration for sometime. In fact, Brekke, when he was head of Asia for Telenor some years ago, had proposed some form of collaboration with Celcom, Axiata’s cellular arm in Malaysia.

and Telenor’s 49%-owned Digi for years. Celcom has had its own issues, with complacency being cited as a big issue at the company.

However, some changes are being made to energise the company so that it can be a formidable challenger to the other players in the local scene.

During the period of intense negotiations, Brekke practically housed himself in Kuala Lumpur nearly all weekends. But Telenor and Axiata have not clearly articulated what exactly broke the deal. Here, though, are some of the issues that had surfaced, based on information from sources.

One was that there was some level of discomfort in the fact that the Norwegians would be taking the driver’s seat in the merged company (mergedco).

As part of the deal, a new company (mergedco) was to be set up to house all the Asian assets, and based on the valuations prior to the announcement, Telenor was to end up with a 56.5% stake and Axiata 43.5% in the mergedco. “That became an issue for some, as it was seen as Axiata being sold off to a foreign party, ’’ says an industry source. Regulatory hurdles were another. The proposed merger involved 14 entities in nine countries with thousands of employees.

There was an apparent reluctance on the part of the Indonesian authorities to give their blessings to an ally of the European Union (Norway), which wants to ban the use of palm oil for biofuels by 2030. Indonesia is the biggest exporter of palm oil globally, followed by Malaysia.

“Any deal without PT XL Axiata in Indonesia would no longer be attractive to Telenor, which wants to be in that growth market, ” says one party.

Furthermore, without Indonesia in the picture, valuations would not add up.

“Even if they bumped up the valuations of Axiata’s tower business, if XL is out of the merger, Axiata’s stake in the mergedco would drop to about 30% from the planned 43.5% and that will put Axiata in a disadvantageous position as a partner in the merger, ’’ says a source.

The Malaysian government had also raised concerns if there was going to be significant job cuts stemming from the merger.

On the other hand, it is well known that Telenor operates in a lean fashion and if it had its way, it would certainly need to trim workers in parts of Axiata’s business.

Besides that, poison pen letters were flying around and some had even created a blog “Save Celcom’’ in a bid to save jobs.

The merger was expected to cut redundancies and generate cost savings or “synergies’’ of about US$5bil annually. The mergedco valuation would have exceeded RM100bil and the incremental value to Axiata shareholders was projected to be over RM9bil.

However, detractors say that the deal would be more appealing to Axiata’s shareholders if a cash offer was included.

“A sweetener was seriously lacking. You can’t expect all investors to stay, you must give them a chance to exit. So, it was not an attractive deal for minority shareholders, ’’ he adds.

The jewel in the crown

Telenor is a Norwegian company that has built a strong presence in Asia over two decades.

It has stakes in several Asian countries, including 49% in Digi. Naturally, Indonesia is a market it wants to be in.

It would now have to find new ways to enter Indonesia and other markets in Asia, as some of its shareholders are pushing for better growth.

It is also currently pursuing a buy-out of Finnish player DNA plc to strengthen its market in the Nordic countries. But it is not alone in its pursuit of Axiata.

Sources say at least two other big telecoms parties have come forward to pursue some form of collaboration or even an outright purchase of Axiata’s Indonesian and other units.

“One party is willing to pay a premium just to get Axiata’s 66.5% stake in XL, which is the second-largest player in Indonesia. Axiata has cleaned up the company and slated it for more growth there, ’’ says a source.

The Indonesian mobile market is growing fast. A report points out that the mobile market alone there will account for 81.9% of total telecoms revenue in 2023, driven by increasing adoption of high-speed mobile Internet services.

Another party is purely interested in Axiata’s Sri Lankan and Bangladeshi operations and the suitor is believed to be a large player from China.

Axiata was created after the demerger of TELEKOM MALAYSIA BHD

(TM) back in September 2007. Then, it was known as TM International Bhd which housed all of TM’s overseas operations.

At that time, Khazanah Nasional Bhd, the parent company, had decided that the move was necessary to reflect the full valuations of the group’s assets. Over the years, Axiata grew in size, snapping up stakes in several countries and gaining strength in Asia. It is a regional powerhouse with stakes in entities that make up a large part of the Indian sub-continent and South-East Asia.

“Although the journey has been tough, considering that its operations are in so many markets with their respective challenges, Axiata remains in a position of strength, notwithstanding the collapse of the deal, ’’ says another industry executive.

Many of its issues in most markets have been somewhat resolved besides the one in Nepal, which is pending the outcome of its disagreement over a massive tax payment.