TNB likely to give higher dividend

This was following TNB’s decision to announce an interim dividend of 30 sen in the second quarter of FY19, representing a dividend payout of 55% based on the adjusted earnings for one-off items.

“We still like TNB as the regulatory risk from sector reforms seems to be low, as it will likely maintain its monopoly in the transmission & distribution (T&D) segment and it is one of the cheapest big cap counters, with a decent dividend yield of about 4% for FY19-21, ” added CGS-CIMB Research.

Meanwhile, in a separate note, TA Securities Research said that TNB’s core net profit of RM3.08bil in the first half of FY19 was within its expectations and consensus, accounting for 55% of full-year forecasts respectively.

For context, the core net profit in the six-month period fell by almost 19% year-on-year from RM3.8bil.

Commenting on regulatory headwinds faced by TNB, TA Securities Research said that the impact will remain benign at this juncture.

“For the generation business, we believe that TNB shall retain its market superiority versus new players in the event that this segment is liberalised. This is given TNB’s entrenched market leadership (current market share: 56%), solid track record, and strong balance sheet, ” it said.

However, in the worst-case scenario of retail market liberalisation, the impact to TNB’s net profit could amount to about 0.5% during the Regulatory Period 2 (2018-20), or average net operating profit after tax of RM21mil per annum. 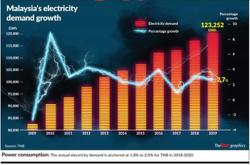