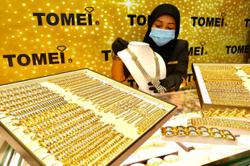 Penang Goldsmith Association (PGA) adviser Joeson Khor told StarBiz that the price of gold shot up too high within a short period.

Penang Goldsmith Association (PGA) adviser Joeson Khor told StarBiz that the price of gold shot up too high within a short period.

“Wholesalers in Dubai will have to pay more for gold bars to be used in exchange for Malaysian-made gold jewellery.

“For this reason, they would rather wait for the gold price to stabilise before buying, ” Khor added.

From January to May 2019, Malaysian gold jewellery exports hit RM2.82bil, compared with RM2.17bil for the same period a year ago.

The top buyers of Malaysian gold jewellery products in the first five months of 2019 were the UAE, Singapore and Hong Kong.

“We expect the gold price to go up to around US$1,700 per ounce by the end of the year.

“The support level of the gold price is at US$1,200 per ounce and should not drop below that. This means the total cost of producing an ounce of gold, which includes mining and processing, is US$1,200 per ounce, ” he added.

From January to May 2019, Malaysia imported RM1.03bil worth of gold jewellery compared with RM0.53bil in the same period of 2018, according to Malaysia External Trade Development Corp statistics.

About 80% of Malaysian gold jewellery exports come from Penang-based manufacturers and exporters.

Khor said more than 60% of the 650 PGA members were small and medium-sized companies with an annual turnover of less than RM25mil.

“The US-China trade war and tensions in the Middle East also played a role in gold price spikes, ” he said.

“Those who bought gold bars earlier are now making money. We are seeing a lot of gold bar trading activities now.

“Many investors are also buying gold bars lest the price of gold shoots up further, ” Ng said.

Ng said Public Gold looked to generating RM400mil for the 2020 financial year ending next March, compared to a RM200mil turnover in 2019.

According to a recent World Gold Council (WGC) report, the gold price has broken through US$1,400 per ounce for the first time since 2013.

“Among the factors driving this rally are expectations of lower interest rates and political uncertainty, with further support coming from strong central bank buying, ” the report says.

According to WGC, central banks bought 224.4 tonnes in the second quarter of 2019, which increased the buying in the first half to 374.1 tonnes, the largest net first-half increase in global gold reserves in WGC’s 19-year quarterly data series.

The report added that holdings of gold-backed exchange-traded funds (ETFs) grew 67.2 tonnes in the second quarter to a six-year high of 2,548 tonnes.

“The main factors driving inflows into the sector were continued geopolitical instability, the expectation of lower interest rates, and June’s rallying gold price.

“A strong recovery in India’s jewellery market pushed demand in the second quarter up 12% to 168.8 tonnes. A busy wedding season and healthy festival sales boosted demand before the June price rise brought it to a virtual standstill.