is confident that all its divisions – engineering and construction (E&C), drilling, as well as exploration and production (E&P) – will turn profitable within 12 months, driven by higher utilisation of its assets.

President and group chief executive officer Tan Sri Shahril Shamsuddin said the group’s earnings recovery would be seen from its E&C business securing more contracts and an improving rig utilisation rate at its drilling division to about 70% in 12 months from 50% currently.

“You will get very encouraging results in 12 months from now. Currently, we are still under-utilised. We need to push for utilisation in rig drilling and E&C.

“The group’s earnings will return to profitability once the utilisation of its drilling and E&C businesses crosses the 70% mark,” he told reporters after the group’s AGM yesterday.

Should the group secure new drilling contracts, Shahril said the oil and gas (O&G) company would allocate between RM200mil and RM300mil of its capital expenditure to complete the construction of some of its rig assets.

He is confident that Sapura Energy’s E&P business would be “profitable” this year, adding that it is on track to achieve its first gas in the SK408 Gorek, Larak and Bakong field before the year-end.

In the second half of this year, Sapura Energy aims to secure contracts worth RM3bil, which will increase its total order book to RM22bil in the financial year ending Jan 31, 2020 (FY20) from RM17.2bil in FY19.

“We will be comfortable for the order book to be between RM21bil and RM22bil, so we need to work a lot harder. We have to set tough targets,” Shahril said.

Moving ahead, he expects Brent crude oil prices to hover between US$60 and US$65 per barrel in the next two years on the back of global growth, which will provide more opportunities for contracts.

“Actually, the crude oil price between US$60 and US$65 per barrel is enough for the sustainability of oil companies to approve their development programmes. We are seeing that (activities) in the number of bids that we have been invited to go into,” he added.

As at press time, the benchmark Brent crude futures had risen to US$64.42 per barrel.

Apart from this, Shahril said the O&G giant is increasingly bidding for renewable energy (RE) projects in Europe, which would boost revenue contribution by 15% in the future.

He disclosed that the group is bidding for two tenders in the RE sector in Europe, with one tender worth 120 million euros (RM554.4mil) for the installation of wind farms.

Shahril added that the group’s existing assets would be used for the deployment and execution of RE contracts, which will drive the utilisation rate of the assets.

With Petroliam Nasional Bhd also venturing into the RE sector, Shahril said Sapura would participate in construction capabilities and prepare itself to serve the industry’s need as the market continued to grow.

On the other hand, he confided that there would be two new board members from Permodalan Nasional Bhd (PNB), adding that it is likely that more changes would take place in the future.

“It is a positive move, as the group is solidly backed by Malaysia’s largest state fund, PNB,” he added. 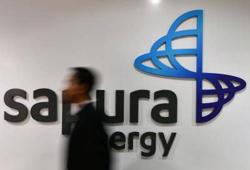