KUALA Lumpur Kepong’s (KLK) 19.68%-owned Synthomer, a specialty chemicals listed on the London Stock Exchange which one of the world’s major suppliers of aqueous polymers, has announced for a cash call of £650mil (RM3.3bil) to partly finance the proposed acquisition of OMNOVA Solutions Inc, a US-listed chemicals company.

Based on the KLK’s equity stake, PublicInvest Reserach said it would need to chip in RM207mil, which could be easily funded as it is sitting on a healthy net gearing level of 0.23 times with a total cash level of RM1.4bil.

It maintained “neutral” on the stock with an unchanged target price of RM22.20.

To recap, Synthomer will finance the acquisition through a rights issue to raise £240mil (RM1.2bil) and the remainder will come from new debt facilities.

The issue price of 240 pence per new share represents a 30.4% discount to the theoretical ex-rights price based on the closing of 371.2 pence per Synthomer share on July 2.KLK has given Synthomer an irrevocable undertaking that it would subscribe for all its rights shares entitlements under the rights issuance plan.

Accordingly, the subscription cost for KLK’s rights share entitlements will be £40.1mil (RM207mil), which will be financed by KLK’s existing cash reserves and bank borrowings.

In the event the group is called upon to subscribe for the remaining new shares, KLK’s shareholding may increase up to 21.64% of the enlarged issued share capital of Synthomer, that will potentially make Synthomer an associate company of KLK. 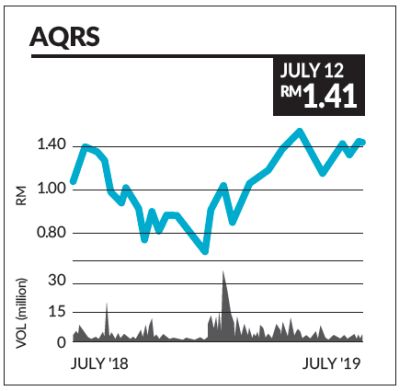 “It is exploring a tie-up with a potential partner to bid for the project. It has also submitted RM2.2bil worth of tenders for the Pan Borneo Highway (PBH) Sabah together with Suria Capital,” it said.

“We gather that AQRS is looking to tie-up with a large bumiputra contractor to bid for ECRL subcontract works.

“Finding a bumiputra partner with a large balance sheet will allow the joint venture to bid for a multi-billion ringgit subcontract under the bumiputra category, which is less competitive due to preferential treatment and fewer bidders,” it added.

Affin Hwang said AQRS cost advantage is its established construction operation in KotaSAS, which will have an ECRL station, and it has access to quarry stone supplies in Pahang.

AQRS is one of Affin Hwang’s top market and sector-buys with lifted target price of RM1.88, based on 20% discount to realised net asset value.

It said AQRS has good prospects to grow its remaining order book of RM1.96bil, equivalent to 3.6 times FY18 construction revenue.

Affin Hwang Capital raised its target price to RM1.88 from RM1.65 by narrowing the discount to RNAV to 20% from 30% previously. “AQRS is our top sector buy rated given attractive valuations and a potential ECRL project beneficiary,” it said. 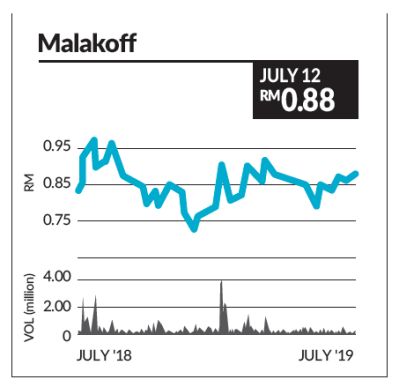 MALAKOFF has entered into an agreement to acquire the entire stake in Desaru Investment Ltd (DIL) from Khazanah Nasional Bhd for US$70mil.

Currently, DIL owns a 40% stake in a Malaysia consortium, which consists of Malakoff (40% stake) and Tenaga Nasional Bhd

Effectively, Malakoff will eventually double up its stake in these two assets to 24% each from 12% currently when the acquisition is completed by the fourth quarter of the year.

The IWPPs, the first and largest in Saudi Arabia, are the main water suppliers for Makkah Province and form 13% of power and water capacity for the country.

Both assets still have remaining concession tenure periods of about 10 years.

“The acquisition is priced at enterprise value to earnings before interest, taxes, depreciation and amortisation EV/EBITDA of circa eight times which we believe is fairly reasonable, being quite close to Malakoff’s FY18 EV/EBITDA of 7.8 times,” it said.

It said that upon the completion of the acquisition, contributions from these two assets are important as they could make up a-third of the group earnings.

“We keep our estimates unchanged for now pending completion of acquisitions while adjusting our sum of parts valuation to reflect the latest FY18 book value for associate companies as well as cash position,” it said.“With an unchanged 30% discount to its sum of parts valuation, our new target price is RM1.00, implying FY20 price to earnings ratio of 19.7 times, from 90 sen previously.

“We also upgrade the stock to outperform from market perform as the Saudis assets acquisition is an earnings booster coupled with decent yield of 5%,” it added.