All but six governments voted in favour of the pact, with Russia, Singapore, El Salvador, Malaysia, Paraguay and Kyrgyzstan abstaining, ILO records showed. Employers representatives from Malaysia and several Latin American countries voted against it. (FILE PHOTO: A protester raises a placard reading "#MeToo" during a rally against harassment at Shinjuku shopping and amusement district in Tokyo, Japan, April 28, 2018. REUTERS)

GENEVA: The U.N. agency overseeing international labour standards adopted on Friday a new treaty against violence and harassment in the workplace, fuelled by the women's #MeToo movement.

The convention, which will be binding on governments that ratify it, was agreed by a wide margin on the final day of The International Labour Organization's (ILO) annual conference of governments, employers groups and workers.

"For the very first time ... the international community has equipped itself with a global instrument to combat violence and harassment at work," ILO director-general Guy Ryder said after its adoption to cheers.

The #MeToo movement, sparked by allegations in Hollywood in 2017, cast a harsh light on widespread patterns of sexual harassment or abuse in multiple spheres of American life.

It has led to dozens of powerful men in entertainment, politics and other fields being accused of sexual misconduct.

The century-old ILO began its first discussions in 2015, Ryder said, adding: "The momentum and the significance of this process has been accentuated by the #MeToo movement."

The treaty aims to protect workers, irrespective of contractual status, from harassment in places where they are paid, taking a rest, eating or using sanitary facilities.

Ryder said the next step was national ratifications.

All but six governments voted in favour of the pact, with Russia, Singapore, El Salvador, Malaysia, Paraguay and Kyrgyzstan abstaining, ILO records showed. Employers representatives from Malaysia and several Latin American countries voted against it.

"EPIDEMIC ACROSS THE WORLD"

"Nobody should be subjected to violence and harassment at work. It is an epidemic across the world that needs to end," employers' spokeswoman Alana Matheson told the talks.

The text aims to protect all workers in the public and private sectors plus the informal economy.

"No-one should be expected to endure any form of gender-based violence and harassment when they come to work - whether it is persistent comments and jokes, leering, sexist remarks, groping or worse," said Marie Clarke, the workers' vice-chair.

"Sadly, this is the reality for too many workers."

The text does not specifically refer to LGBTi (lesbian, gay, bisexual, transgender and intersex) people as being amongst the most vulnerable, as sought by activists.

Ryder acknowledged that the LGBTi issue was controversial, but said: "The spirit of the Convention ... is that everybody falls under the protection of this Convention".

Iran's representative said the treaty should be considered in accordance with each country's national context, norms and values. The Islamic Republic, which voted in favour, said it had a policy of "zero tolerance" against workplace harassment.

Martha E. Newton, U.S. Department of Labor deputy undersecretary for international affairs, said it was important to note that lawful enforcement of immigration laws should not be construed as harassment under the convention. 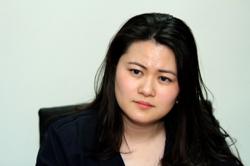