AS perplexing as it may sound, companies with a small free float of shares are difficult takeover targets. The cost incurred by the major shareholder to take the company private is little.

However, getting the support of minorities is tough. The tight shareholding situation also allows small funds with limited capital to be kingmakers in any privatisation exercise.

where the major shareholders, HL Cement (Msia) Sdn Bhd, and an associated party have offered to take the company private at RM5.50 per share. HL Cement, which is controlled by the Hong Leong group’s Kwek family that is based in Singapore, together with Ridge Star Ltd, has slightly more than 80% of Tasek.The two parties seek to mop up the remaining 19.2% of the cement producer and distributor. The offer was launched on May 28, with the first closing date falling on July 9.

To take Tasek private, HL Cement and Ridge Star need to get acceptance from 90% of the remaining shareholders holding some 22 million shares. That seems like a tall order, considering that the market price of the stock is marginally higher than the offer price.

Towards this end, last Friday, Tasek ended at RM5.51 per share, which is a marginal premium compared to the RM5.50 offer.

As the share base of Tasek is small, it only requires some RM123mil to take it private, a small amount for tycoons such as the Kwek family.

However, getting acceptance to the point of more than 90% so that the company may go private is a tall order. All it takes is only a few shareholders with some 2.5 million Tasek shares declining the offer, a move that would thwart the exercise.

This is probably why HL Cement and Ridge Star are making an unconditional offer. For the offerers, if they get another 10%, Tasek may likely be suspended, as it does not meet the free float requirement.

By then, those resisting the offer will consider exiting the company. Whatever the case, it appears to be a long battle for the major shareholders of Tasek.

ALL will not be lost for FGV Holdings Bhd

if the land lease agreement (LLA) with Felda is rescinded. This comes out quite clearly in the latest message from FGV’s chairman, Datuk Wira Azhar Abdul Hamid.

It essentially painted a picture of FGV being an upstream player in the plantation sector with a small exposure to plantations, just like other established plantation companies in the world.

The letter delved into some detail on the LLA and potential impact on FGV should Felda take back some of the land that was leased to FGV during its listing in 2012. At the moment, out of the 439,725ha of plantation land under FGV, 351,000ha are covered under the LLA agreement.

Felda wants it back and hence seeks to rescind the LLA agreement. Felda feels that it is able to better manage the plantation and meet its obligations towards the settlers if it managed the plantations itself.

If the LLA is rescinded, FGV would seek compensation from Felda, which essentially means the government having to fork out money.

According to Azhar, FGV will still own the mills and refineries which are located close to the plantations covered under the LLA. At the moment, two-thirds of the fresh fruit bunches processed in the mills are sources from third-party plantations, including Felda settlers.

Also, FGV’s biggest cost component today is from its upstream operations, where staff cost accounts for RM998mil. In addition, FGV has to pay Felda RM248mil in LLA fees and incur RM300mil in replanting cost.

Put in a nutshell, handing back the plantations to Felda is probably a good idea for FGV. However, how much will the compensation be and how will the government recoup the amount? 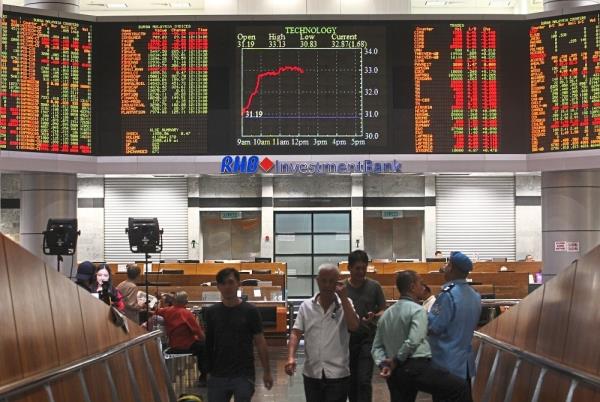 Getting the stock market going

IN the go-go 1990s, the Kuala Lumpur Stock Exchange (KLSE) was a darling among emerging markets. The one benefit it had was its inclusion in the MSCI indices as a developed market, which meant that a lot of foreign money was made available to buy Malaysian stocks.

It was a time many have forgotten – the boom days of the stock market. The activity that was seen in terms of trading is stuff of legend today, with market volumes and especially value soaring to heights many will not think possible today.

Settlement dates were long and oversight on the market was in its infancy. The Securities Commission had just begun and it was uncharted waters for the stock market, as retailers and syndicates ruled the roost without much worry of repercussions.

Times have changed since then, as we no longer will see Hwa Tai Industries Bhd

trading at more than RM200 a share. Oversight and the growth of the unit trust industry meant that retailers, who had since been burnt after the Asian Financial crisis and the dotcom bust, had little stamina to go on their own.

The unit trust industry took over the role of the retailers, as money became more institutionalised. This means money sought fundamentals instead of chasing speculation. There had been periods since then when specific counters ran counter-cyclical to what the direction of the market was, but over time, much of the speculative fervour was lost.

Today, some will say the stock market is listless. Retail participation is in the 20% range instead of being the dominant force it was in the heydays of trading in the 1990s when the KLSE was among the most vibrant markets in Asia.

It is, therefore, understandable why the regulators may have decided that it’s time not to put the market in a straightjacket anymore. And the reasoning is simple.

A hot market means wealth generation and that is essential in not only lifting the profile of Bursa Malaysia but also driving wealth creation that is paramount for the economy. Wealth made from the stock market can lead to reducing the overhang in the property segment and also lift domestic consumption, which has been a driver of economic growth in recent years.

There, however, needs to be a premise for that to happen. Government direction and policies have to facilitate the drive in interest in the listed companies to participate in executing government policies and valuations, and earnings potential has to commensurate with investor interest.

Just allowing for more “activity” is not enough. Whatever drivers the market needs to latch on have to be promulgated by official policies, and that is what is needed before anything can even resemble what the market had experienced in the 1990s.