is targeting to be the biggest nitrile glove producer in the world by the end of this year with total production of between 25 billion and 30 billion gloves per year.

The largest glove manufacturer in the world has been busy ramping up its nitrile gloves output in the past two years.

“If we work very hard, we would be able to achieve that goal by the end of this year,” said Top Glove executive chairman Tan Sri Lim Wee Chai during a conference call here yesterday.

Additionally, he said the company is expected to increase its nitrile glove production by 15.8 billion more next year.

In total, Top Glove would increase its production capacity to 83.3 billion gloves per year in 2020.

Lim said the company has been spending on average RM400mil per year in capital expenditure for the expansion of its manufacturing plants.

On the trade war between China and the United States, Lim said that the glove industry would not be affected.

“Any war is not good. We expect that the trade war would not have a big impact on us and the glove industry as a whole,” he pointed out.

CIMB Research had earlier said the trade war would increase the prices of all China glove exports that could benefit Malaysian glove makers.

This was despite higher revenue recorded during the quarter, which grew 8.1% y-o-y to RM1.19bil from RM1.10bil thanks to higher sales of nitrile gloves.

Revenue for the period rose 20.5% to RM3.61bil from RM3bil previously. 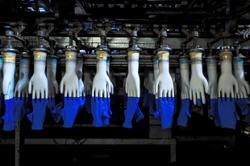