More women are joining the ad and media space which was once regarded as a male dominant industry.

The CEO and founder of M&C Saatchi Malaysia became the first and only Malaysian woman ever to win such an accolade.

The award, which was organised annually by Campaign Asia magazine, aims to champion female change makers, leaders, achievers and rising stars in the media, advertising and marketing industry.

It also recognises those who have shown outstanding leadership and fostered groundbreaking innovation. The awards are open to regional entries from all over Asia-Pacific, and attract a high calibre of entries, as testified to by a diverse international field of finalists in 2019.

She told StarBiz that the win was a testament to the growing number of female entrepreneurs and female corporate leaders making a lasting mark in all spheres of Malaysian life.

She said the award was as much a recognition of the agency’s teamwork as it was a personal milestone.

“It is immensely humbling to be the first-ever Malaysian honoured at the WLCA. I see this as a recognition not for myself, but for the growing voice that women, and Malaysian women in particular, have earned in shaping the destiny of the organisations that we work for.”

“We have always endeavoured to make M&C Saatchi Malaysia a beacon of diversity, where gender is always secondary to talent. In fact, six of the nine key senior management positions in the company are held by women.

“I sincerely thank all the 120 staff of our agency who made 2018 a banner year for us. They truly worked as a team to lift the agency to greater heights. To me, they too are indirectly the “Business Leaders” that this award honours,” Sharifah added.

As noted in the WLCA entry, the Business Leader of the Year Award was a strong testament to M&C Saatchi’s outstanding performance in the 12-month period (2018) on which the award was based.

The agency added 13 new clients in 2018, and also recorded a 100% client retention rate during that year. Perhaps most impressive in the annual client satisfaction survey, 100% of M&C Saatchi Malaysia’s clients say they would recommend M&C Saatchi to their peers.

Moving forward, the agency intends to focus on talent diversity and strengthen its core, by hiring the best people.

“We’ll consolidate our resources rather than expand, and make sure each person is able to multitask and is experienced in 360 degree marketing. They can’t work in silos anymore.

“We have a firm commitment to investing in our people – in their job satisfaction, happiness and personal development – and I think we have created an attractive and sought-after industry culture and helped maintain the agency’s industry-beating employee retention rates,” she stressed.

Sharifah noted there was no exact formula for success except to stay absolutely focused on what the agency does and to continuously evolve to stay relevant and differentiated.

M&C Saatchi has a strong belief in its product which is creativity and in building a home for creative entrepreneurs, she said.

The agency, she added, has stayed true to this belief all these years and the key reason for the success is because it never deviated or got distracted even when times were tough.

Commenting on the challenges, Sharifah foresees that the ad and media market would be tough in the near term and agencies would have to brave the rough ride ahead.

Anticipating an economic slowdown and spending cuts by the government and government-linked companies (GLCs), she said this would have a huge impact on the industry.

Sharifah added: “Bigger agencies also need to face up to increased competition with the rise of small players amid clients looking for cheaper alternative.

“With digital taking a big chunk of the advertising dollar, this would mean squeezed margins and less budgets for big productions etc. Towards this end, we are looking for collaboration with companies in data, tech and media and social media.”

In terms of the agency’s core strengths, she described it as a cycle, adding that clients would sooner or later realise that they need skilled talents, and have to engage versatile agencies.

Against the backdrop of rising competition, she said branding becomes ever more crucial and strategic positioning is important as well as data and analytics.

Sharifah said: “You really can’t get all this expertise from small shops. We will continue to sharpen these skills as well as innovating continuously. We also want to look for new revenue source that will add to our offering e.g. Watermelon production and The Source research which was launched this year.

Through these sessions, Sharifah said the agency was able to host the most innovative and influential marketing leaders, and inspire its teams and clients equally.

“It’s not just immense versatility, quicker turnarounds and competitive rates that make Watermelon special – it’s the fact that we consciously set it up as a platform for young, digitally-attuned and eager young talents to shine and build a name for themselves,” she said.

The Source focuses on international expertise under a Malaysian roof. Looking through the lens of 2018 but with a view to five to 10 years down the road, the agency foresaw the acute shortage of truly world-class, future-calibrated research capabilities in the Malaysian market.

“We then reached out to the M&C Saatchi Group based in London, working with them to set up The Source, a “one-stop” qualitative/quantitative research agency delivering customer insights with industry-best tools,” Sharifah added.

Agency clients in Kuala Lumpur would now be able to tap into a resource that is of genuinely world-class quality, helmed by Dan Harrow, who has experience across 16 markets. Yet again, sharpening the uniqueness of M&C Saatchi Malaysia’s overall offering, and positioning the agency to be a client magnet well into the future.

Having grown M&C Saatchi Malaysia from a tiny start-up with seven people into a 120-strong organisation within just 10 years, Sharifah was able to reflect upon the traits required of a successful female leader.

On leadership, she said she does not think there is a specific leadership style that can be called “female”. Some of these principles are just about being a good leader, mentor and friend, she added.

“To lead well, you need to set expectations that are both clear and well understood. To mentor well, always be encouraging and motivating. Keep your people on their toes, yet nurture their strengths.

“And finally, to be a good friend to your staff, partners and even clients, just apply the universal values that we should bring to every relationship in our lives – respect, compassion and caring,” she explained.

Sharifah said it is by applying these timeless human values to our daily and working lives that leaders – both female and male – can continue to grow their organisations, and to empower their people.

Commenting on her victory, global advertising legend Lord Maurice Saatchi, the co-founder of both Saatchi & Saatchi and subsequently M&C Saatchi, added: “How do you get an amazing track record like Sharifah in business, politics and public service? By leading change.

“She did it by expressing Saatchi values and then making them come true. She proves that nothing is impossible, that an individual acting alone, or almost single-handed, can make what seems highly improbable in fact happen. Sharifah is not just the heroine of M&C Saatchi’s proud history. She is the role model for its future generation.”

She hopes the win would provide inspiration for the next generation of Malaysian women.

“The very name - Women Leading Change Awards – is a great reminder that female leaders are indeed driving change across the whole of Asia-Pacific. I look forward to seeing more winners from Malaysia in years to come.” Sharifah concluded. Ad industry to bounce back 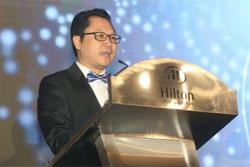