Nike is expanding its day care benefit and employees are furious 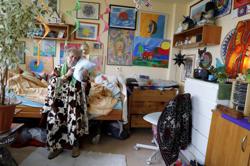 NEW YORK: Nine miles outside of Portland, Oregon, Nike’s corporate headquarters is a mecca of work-life balance. There are wooded trails, ponds and grassy knolls, with company-branded bikes employees are free to pedal from A to B.

Inside, there are cafeterias, meditation rooms, a nearby deeply discounted employee store and, of course, every kind of athletic training facility imaginable.

But one of the company’s most valuable perks has nothing to do with athletics: the Nike Child Development Program, the subsidized, on-site day care available to working parents. Started in 1990, the program now accommodates over 500 families, with more than 500 on the waitlist.

Those lucky enough to get a spot say it’s hard to overstate the convenience. There’s no added commute, and parents have easy access to their kids during the day-a feature especially important to nursing moms.

At a company overrun with perks, there’s broad agreement that the NCDP is one of the features that makes working at Nike really special.

Now Nike’s planning to close the NCDP and replace it with an off-campus facility run by a partner, Endeavor Schools. Prices will remain competitive. Nike will retain oversight.

The location is yet to be determined, but the company promises it won’t be more than a 10-minute drive. Oh, and those kids on the waitlist? The new facility will have space for almost all of them.

The move, aimed at making more Nike families happy, may have achieved the opposite. Within weeks, a petition to keep the program Nike-run and on-campus had more than 1,300 signatures, including about 130 from parents currently on the waitlist or who had tried to get a spot but never got in, according to several employees who had seen or signed the letter. They asked to remain anonymous because they feared retribution from Nike.

Employees don’t want the center to move off campus, according to emails sent to Chief Executive Officer Mark Parker and other senior leaders at the company and reviewed by Bloomberg.

They’re also upset by the decision to effectively lay off more than 100 Nike teachers and caregivers who run the program now. Those teachers and aides have been offered $10,000 retention bonuses to stay through the transition, according to a person familiar with the offer. They’ll also be offered jobs at the new facility if they want them, though without the stock options and other benefits available to them now.

“At the end of the day, Nike’s not child care experts. We’re working with people who are.”

For its part, Endeavor plans to “preserve as much of the program as possible,” said Ricardo Campo, the company’s Chief Executive Officer.

“We have ample experience creating developmentally-appropriate and inspiring learning environments and are confident that we will achieve that in collaboration with Nike.”

For working parents at Nike and everywhere else, affordable, high-quality child care is incredibly hard to find. Over the past 20 years, the cost of day care in the U.S. has doubled-for those lucky enough to find any at all.

There’s not enough child care to meet the demand, and parents can spend months waiting for an opening. This is especially true in Oregon, where roughly 60% of the state’s urban and suburban families live in what’s considered a “child care desert”-defined as an area where there are three times as many kids in need of child care as spots available. Portland parents describe the hunt for day care as “blood sport.”

In one email reviewed by Bloomberg, a vice president who sent two of her kids to Nike day care petitioned Parker and other executives, including Chief Operating Officer Eric Sprunk and HR-head Monique Matheson, to reconsider.

She described how access to the NCDP helped her rise through the ranks. She didn’t have to worry about her children during the day; when she was a nursing mother, she didn’t have to leave campus to breastfeed.

What’s more, some employees said, the change is emblematic of Nike’s failure to adjust a corporate culture that at best ignores the professional stress faced by women in particular.

Last year the company ousted a number of senior executives after an investigation related to sexual misconduct, but it is still facing a gender discrimination suit.

Most recently, female track athletes signed with Nike publicly complained that the company financially penalized them when they got pregnant. (Nike said it improved the policy last year but failed to notify all athletes.)

Nike says the opposite is true-if anything, this change is part of a redoubled commitment to women’s empowerment in general and female employees in particular.

Since 2006, the number of employees at its Oregon headquarters has more than doubled to more than 12,000, growth that’s strained the day care program. The NCDP has three sites in three different buildings on the campus.

The new set-up will open up day care to more employees, while offering similar benefits, pay, and better career opportunities to staff at the centers, the company told employees in an email.

“We aim to make all of our benefits inclusive,” Sprunk said in an email to an employee reviewed by Bloomberg.

That, he added, “includes providing this benefit to the more than 500 families who can’t take advantage of it today. I would ask you to also consider the experience from the lens of the parents who have been on the waitlist.”

As of now, the company’s women’s business accounts for less than half its men’s revenue, but it’s growing nearly twice as fast. “We think 2019 is going to be a true tipping point for women in sport,” Parker said earlier this year.

The recent criticisms of Nike’s corporate culture, then, have been jarring. Nike’s female employees occupy the same demographic the company is betting on for sales growth. And while convenient, affordable child care benefits all parents, it’s especially important for women, who are more likely than men to drop out of the workforce after they have kids.

“Child care is so expensive-that’s a huge barrier for women in particular who are looking at: ‘I just had a child. Does it make sense for me to return to work given my income and the cost of care?’” said Julia Barfield, a senior manager at the U.S. Chamber of Commerce Foundation, who focuses on early childhood education.

If subsidized childcare, not unlike what Nike currently offers its workers, were universally available, U.S. GDP would grow by $702 billion in 10 years, in part by freeing up women to work, according to one recent analysis by Moody’s.

Companies don’t typically fill in that gap. Nike is among just 3% of companies to provide on-site child care services, according to a survey by the Society for Human Resource Management.

Another 4%, including Starbucks and Best Buy, offer subsidized back-up care for when regular arrangements fall through. Earlier this year a group of 1,800 moms at Amazon petitioned CEO Jeff Bezos to add a back-up care benefit.

Even as they asked Nike executives not to go forward with the proposed changes to the NCDP, employees acknowledged their relative good fortune. They know that having access to high-quality child care at work is an extraordinary benefit. They described it as a powerful tool for recruiting and retention-an incentive to work at Nike and a reason to be proud of the company culture. - Bloomberg
Article type: metered
User Type: anonymous web
User Status:
Campaign ID: 18
Cxense type: free
User access status: 3