Sulaiman also hinted that AmBank will be lowering its base rate by this week, following the lending rate cuts by other major banks in the country.

The banking group announced on Tuesday its revenue increased by 6.3% to RM9.12bil from RM8.57bil a year ago.

AmBank said profit before provision increased by 15% to RM1.791bil from the improved operating leverage.

“This is part of our initiatives to improve our capital position and also focus our collection resources on newer vintage delinquent loans.

Sulaiman said the FY19 commendable results “demonstrates that our transformation strategy is bearing fruit and generating value for the group, as we continue to execute our priorities despite heightened competition and headwinds”.

“Continuous cost discipline and business efficiency measures were a key driver in FY19 in improving overall profitability. We reduced expenses by 12% on-year and achieved a positive JAWS of 11%, with our cost-to-income ratio improving to 54.3%.

“Excluding certain one-off costs in the previous year, underlying expenses were also down by 4% after absorbing salary inflation and investments.

“Consequently, our profit before provision recorded a double digit growth of 15.0% on-year. We completed the sale of retail non-performing loans and resolved a few large corporate NPLs during the financial year, further supporting our earnings,” he said.

The higher profit driven by higher lending volume, lower expenses from non-repeat of severance cost and increase in recoveries.

“Compared with the preceding quarter (Q3FY19), profit was up 31% quarter-on-quarter (QoQ) to RM459.7mil mainly underpinned by the gain from sale of retail non-performing loans and provisions write-back,” he said.

Sulaiman said the group’s net interest income (NII) was 3.9% higher at RM2.580bil reflecting the consistent expansion of its loan base.

However, net interest margin contracted 11bps to 1.89%, due to higher liquidity surplus and lending rate pressures in retail banking.

“This was partially cushioned by higher fee income from business banking coupled with better outcome from the life insurance business,” he said. 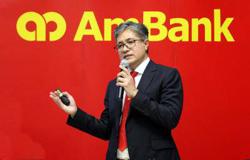 Stronger earnings growth for AmBank in 3Q and 9 months