OCBC’s spot on with new campaign 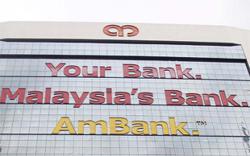 Spot On wear: OCBC Al-Amin Bank Bhd CEO Syed Abdull Aziz Syed Kechik (left) and Ong in front of Menara OCBC with the Simply Spot On T-shirts that the bank

KUALA LUMPUR: The OCBC banking group embarked on a study in 2015 to determine what would make customers bank more with them.

The result was a pledge to listen even more intently to customers and come up with the most appropriate solutions to meet their financial needs.

After three years of thorough research and comprehensive findings on what customers would want from a bank, the group rolled out a demanding brand promise campaign targeted at meeting their needs consistently irrespective of economic climate and landscape changes.

The brand promise – Simply Spot On – was launched at the bank’s headquarters in Singapore in 2018 and now in one of the group’s most important markets – Malaysia.

It is also being introduced in other countries in the region where the OCBC group has a presence.

OCBC Bank (M) Bhd CEO Datuk Ong Eng Bin met up with StarBiz to explain the finer points and the idea behind the campaign and how the brand promise campaign fits into the competitive banking segment in the country.

He said the campaign has been the focal point of OCBC Bank way before the launch of the tagline.

It is a pledge to be Simply Spot On, cutting across everything that OCBC does, from its products and processes, channels and capabilities, client service and interaction, and in its suite of digital offerings, he said.

Ong added that the aim was to give customers the fastest, most convenient and seamless service experience when banking with OCBC.

“The Brand Promise tagline is easy to remember, but not easy to live up to. It is simple and clear in what we are promising our customers, but it also means that we have set ourselves a very high bar to meet.

“And that is why everyone at OCBC is committed to living the brand promise every day so that we can deliver the Simply Spot On experience to our customers consistently,” he stressed during an interview.

The tagline was tested and refined with more than 2,400 respondents over many research sessions including an Implicit Association Test methodology that captures spontaneous emotional responses. Most found the line simple to understand, inspiring and memorable.

The design of the campaign logo symbolises the Brand Promise campaign. The smaller circle is a reminder to OCBC Bank staff that everything they do – even the smallest thing – matters when it comes to delivering a Simply Spot On experience to customers.

By getting everything right, he said it would all come together to form the bigger circle, which represents the Simply Spot On experience with OCBC Bank.

Elaborating the time frame of the campaign and how it came about, Ong said: “In 2015, the Service Excellence Council of OCBC Group, chaired by the group CEO, looked at what would differentiate OCBC from the competition and what would make our customers bank more with us.

“After many rounds of research in which we engaged our individual and SME customers, we identified three brand promise attributes that customers would most value in us: to be reliable; to be smart and knowledgeable; and to take a long-term view.

“This, then, is what we aspire to, that is, to exhibit the three brand promise attributes consistently and effectively, every single day. This must be a holistic aspiration. For our brand promise to meet the expectations and stand up to rigorous scrutiny, it must cut across all areas of a customer’s relationship with us – from products and services, to process, channels and capabilities, from client support to client interaction, from back office, to middle office and to front office. Our brand promise attributes must shine through everywhere, and every step along the way,” he noted.Ong said to convey the bank’s brand promise simply and effectively, it needed a tagline - a tagline that goes far beyond a marketing campaign.

To have a tagline that customers could relate to and bank upon, OCBC needed this to be a pledge that it could make to its customers, one that cements what they can expect when they bank with the banking group, he said.

According to Ong, at Group level, OCBC tested more than 15 taglines and pitted them against famed brand promise taglines adopted by some of the most established brands in Singapore which have a regional presence.

“We brainstormed, tweaked and adapted until we had something that people really responded to – Simply Spot On. It is easy to remember, but not so easy to live up to.

“It is simple and clear in meaning to the customer, but all-encompassing in what it demands of us. This tagline is going to be the focus of our entire organisation going forward,” he said.

Adding further, he said being Simply Spot On for the bank’s customers should not feel like a foreign concept.

Ong noted: “Many of our products and services have been Simply Spot On and were all created as a result of our research into what the customers really needed, and when we launched them, customers’ feedback was – “you are Simply Spot On”.”

Every touch point and every small thing matters to customers, he said. Being Simply Spot On is about ensuring their entire experience with the bank at various touch points in the bank – be it through the contact centre, branches, our ATMs or our websites – is Simply Spot On.On how different is this campaign compared with its peers, Ong added this is a brand promise.

“Not many companies have something that is specific to what it plans to live up to for their customers. The brand promise keeps us alert to our responsibility to them,” he explained.

OCBC Bank is the longest established bank in Singapore. Formed in 1932 from the merger of three local banks, the oldest of which was founded in 1912.

It is now the second largest financial services group in South-East Asia by assets and one of the world’s most highly-rated banks, with an Aa1 rating from Moody’s. Recognised for its financial strength and stability, the bank is consistently ranked among the World’s Top 50 Safest Banks by Global Finance and has been named Best Managed Bank in Singapore by The Asian Banker.

OCBC Bank’s key markets are Singapore, Malaysia, Indonesia and Greater China. It has more than 560 branches and representative offices in 19 countries and regions.