Pic by Daniel Khoo at the KLIA

According to Maybank Kim Eng’s regional aviation analyst Mohshin Aziz, it was his personal opinion this would make both airlines more cost efficient to operate.

Speaking at an Invest Asia 2019 presentation today, he said this would first need a change in mentality of people that an airline had to represent their respective countries.

“A merger between them will see a lot of improvements in terms of scheduling. Besides, relocation of assets can also be optimised,” he said.

“If the full service carriers can move away from this mentality, it will be very good for the business,” he said.

Maybank Kim Eng would like to clarify that the view(s) expressed by the analyst quoted in this article do not represent the house view and position of Maybank Kim Eng.

According to Wikipedia, MSA came about in 1966 as a result of a joint ownership of the airline by the governments of the two countries.However, MSA ceased operations after six years in 1972 when both governments decided to set up their own national airlines, Malaysian Airline System and Singapore Airlines. 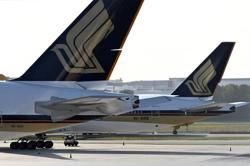