’s acquisition of a 51% controlling stake in Lafarge Malaysia Bhd

has lit up an otherwise dreary merger and acquisition scene in Malaysia.

The RM1.6bil deal is also illustrative of the fact that strategic investors à la the YTL group see longer-term value in assets that public markets do not necessarily fully value.

The conglomerate is known for its bargain-hunting strategy. The acquisition of Lot 10 and its surrounding areas at the height of the financial crisis in 1998 underlines this.

Similar strategies were adopted in its pursuit of assets overseas such as Wessex Water Ltd in the United Kingdom and Singapore’s PowerSeraya power plant.

YTL Corp’s executive chairman, Tan Sri Francis Yeoh, has been apt to boast of the group’s ability to scoop up assets on the cheap.

Lafarge Malaysia is currently the biggest cement producer in the country with around 35% market share. 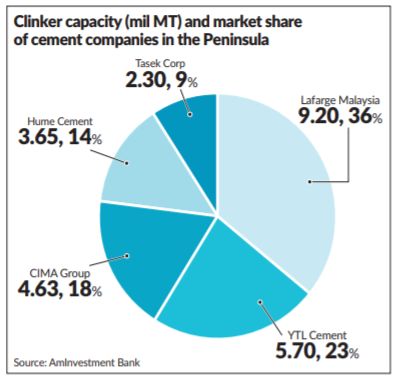 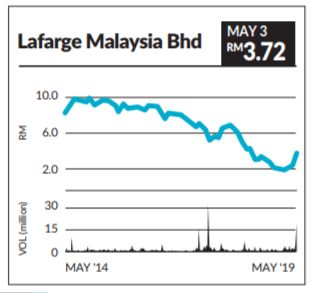 The purchase would vault YTL Corp to the position of dominant cement producer in the country, effectively cornering around a 60% market share.

In addition, LafargeHolcim has signed an agreement with YTL Cement Singapore PTE Ltd for the divestment of its entire 91% shareholding in Holcim Singapore Ltd.

However, the cement industry is suffering from a huge over-capacity not only in Malaysia but also the region. Cement plants have been running at close to half their utilisation rates for the last few years, a reflection of the stiff competition and lack of demand.

The industry is further depressed by aggressive discounts given by the cement producers just to see through sales, say industry players.

On the back of an excessive over-capacity and low demand environment, is YTL Corp biting off more than it can chew by acquiring LafargeHolcim’s Malaysian and Singaporean cement assets?

Sources say YTL Corp has been looking to expand its cement operations and towards this end, was looking at cement plants in the region. In Malaysia, YTL Corp, which started as a contractor and supplier of concrete, graduated to be a cement producer by acquiring Pahang Cement Sdn Bhd in 1998.

Currently, the cement division is the third-largest contributor to YTL Corp’s overall business. YTL Cement’s operations are largely based in Malaysia. However, unlike the utilities segment which gives YTL Corp steady cash flow, the cement division has seen its profitability dropping.

Despite recording higher revenues, margins are crimping due to higher selling and distribution costs, finance costs and competitive pricing in the domestic market. In financial year 2018 (FY18), YTL Corp’s cement division recorded a 22% drop in its pre-tax profit to RM174.1mil as compared to the year before.

The lower profit came in despite it having chalked up a higher revenue of RM2.62bil versus the RM2.43bil made in FY17.

This trend is similar in many other cement companies around the region.

It is even more evident in Lafarge Malaysia, which has been in the red since FY17 and has sunk into a negative cash-flow position since then.

A fund manager is perplexed at YTL Corp’s acquisition of Lafarge Malaysia, describing the transaction as a hefty price to pay just to control the cement market.

Cement in Malaysia is currently priced at RM190 per tonne.

AmBank Research points out that the merged entity with a share of about 60% will become the “price leader” and thus be able to set the price for cement in the country.

But says the fund manager, “Why is YTL Corp buying into a company where the operations are loss-making? So that it can be the price leader?

“It would seem that smaller competitors such as Tasek Corp Bhd

would benefit more if prices improved, as they stand to gain without having to fork out RM1.6bil.”

But considering the dominant position that YTL Cement will now have, the question that has cropped up is whether the merger would need the approval of the Malaysia Competition Commission (MyCC).

In a reply to StarBizweek, MyCC clarifies that YTL Cement does not need its clearance. The competition watchdog says it will only act if the merged entity starts abusing its dominant position.

Meanwhile, many research firms such as CIMB, MIDF and Affin Hwang Capital feel the transaction, which works out to 1.25 times price-to-book (P/BV) is fair.

MIDF notes that the valuation of the deal is at a discount to PT Semen Indonesia Tbk’s recent acquisition of PT Holcim Indonesia Tbk.

To recap, in November last year, LafargeHolcim sold its 80.6% stake in PT Holcim Indonesia to PT Semen Indonesia for an enterprise value (EV) of US$1.8bil. This valued PT Holcim, which is the third-largest player in Indonesia, at an EV/tonne of US$118.

“ YTL Cement’s deal for Lafarge (which is the largest player in Malaysia) is relatively cheaper at an estimated US$103/tonne and is lower than the replacement cost of US$125-US$130/tonne,” says MIDF.

It says that at 1.25 times, the deal values Lafarge at the lower end of its mid-cycle P/BV.

“Valuation-wise, this seems like a pretty good deal,” MIDF adds.

Even so, the improved pricing power from the consolidation would be mitigated by the cement market’s over-supply state and weak demand, say analysts.

Upon the completion of the deal, YTL Cement has to extend an unconditional mandatory takeover offer for the remaining 49% stake in Lafarge Malaysia that it does not own.

However, considering that YTL Cement intends to keep Lafarge Malaysia listed indicates that it could be the vehicle to park its cement assets.

But whether the stock remains listed would depend on the acceptance level of the remaining 49% shareholders, who are mainly institutions. Collectively, institutional shareholders owned more than 24% of Lafarge Malaysia based on its 2018 annual report.

Among the larger ones are Amanah Saham Bumiputera with 8.24% and the Employees Provident Fund which holds 8.24%.

As for YTL Corp, although with a cash pile of RM14.3bil, it has taken on large debts mainly due to its utilities business.

The conglomerate, which has interests in construction, property development and utilities besides cement production, was in a net debt position of RM28.31bil as at September 2018.

According to CIMB Research, based on the proforma impact on YTL Corp’s balance sheet from the proposed acquisition and including Lafarge’s RM834.7mil debt as at end-FY18, the group estimates that gross gearing will increase from 1.53 times as at end-FY18 to 1.7 times post-takeover of the 51% stake.

Assuming there is full acceptance, YTL Corp’s gearing would go up to 1.81 times.

This is likely to pose a medium-term overhang on YTL Corp’s share price.

“From an industry perspective, consolidating YTL Cement and Lafarge Malaysia’s operations may somewhat raise the pricing power of the combined entity, but is unlikely to completely eliminate industry rebates in our view, given the industry’s current oversupplied state,” it notes.

But a significant recovery in overall demand will accelerate a turnaround for Lafarge Malaysia and lead to swifter synergies for YTL Corp, which sees the acquisition as a strategic fit, as it has been looking to expand its cement operations.

Sources say YTL was eyeing cement assets in Indonesia and Vietnam but found the cheapest valuation in the Lafarge Malaysia deal - the latest divestment by the Swiss cement-maker as it retreats from non-core markets to focus on areas like North America and Europe. The world’s largest cement-maker has also been trying to cut costs, closing offices in Miami, Paris and shifting its headquarters from Zurich to the Swiss city of Zug, Reuters reported.

Back to YTL, its main challenge is to create as much synergies and savings as possible and turn around Lafarge Malaysia.

Industry observers do not rule out the possibility of it needing to cut some duplications and derive better efficiencies.

One industry player reckons that YTL will only start to see tangible benefits a few years down the road, when demand will pick up following the revival of several mega-infrastructure projects.

“Several key projects such as the East Coast Rail Link, Bandar Malaysia, the Klang Valley Double-Tracking Project and the Penang Transport Master Plan have recently been revived. As a result, we expect cement demand to improve and this should help support cement prices,” the research house says.

Only after that can we possibly see a sequel to this acquisition, namely, the injection of YTL Cement into Lafarge Malaysia, if the latter remains listed.

Floating that idea, AllianceDBS Research says such a prospect could create greater shareholder value. The research firm has advised Lafarge Malaysia’s minority shareholders not to accept the offer from YTL Cement, believing that the stock could fetch higher valuations.

A fund manager says that the acquisition of Lafarge Malaysia at a steep discount will allow for YTL Cement to be injected at a premium.

“The industry average for cement companies is 1.7 times book. So, the merged entity has the potential for value-creation through the injection of assets via a similar business.”

Assuming the stock is valued at its three-year forward P/BV mean (of 1.7 times book value) on completion of the offer, it would imply a RM4.55 value/share for Lafarge Malaysia, says AllianceDBS.

It closed unchanged yesterday, giving the stock a market cap of RM3.16bil.

The multinational corporation stock, which used to trade at an average of RM6.83 in the last five years, dipped to a low of RM1.80 in December last year. 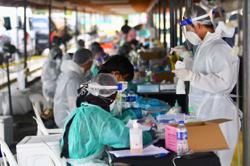