Over 30% increase in unsold residential properties in Malaysia

Citing the National Property Information Centre (NAPIC) data, it said the secondary property market makes up about 80 per cent of all residential property transactions in the country, compared to around 20 per cent of new properties (the primary market).

KAJANG: The year-on-year residential overhang in Malaysia increased to 32,313 units valued at RM19.86bil in 2018, an increase of 30.6% in volume and 27% in value, according to the Valuation and Property Services Department (JPPH).


“Selangor, despite a decline, recorded a marginal decrease of 0.4%,” it said.


To address the country’s home ownership and overhang dilemma, the government has announced a number of initiatives in conjunction with the six-months Home Ownership Campaign (HOC), such as the exemption of stamp duties residential units priced between RM300,000 and RM1mil.


These are only for properties of developers that are participating in the HOC, which kicked off in January.


For houses sold above RM1mil to RM2.5mil, stamp duty exemption applies for the first RM1mil, and the rest will be charged at 3%.


Stamp duty on loan agreements for properties up to RM2.5mil would be exempted, compared with the previous rate of 0.5%. 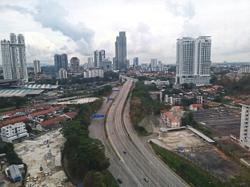