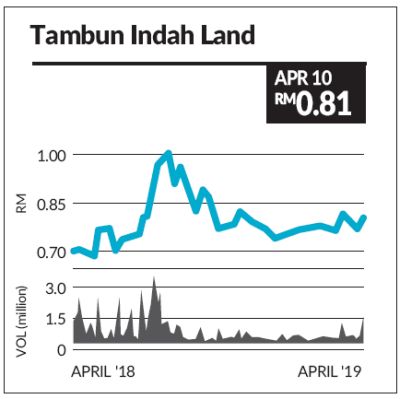 TAMBUN Indah’s land acquisition is seen as a positive move as the market has been anticipating it to replenish its landbank since a few years ago.

The new land, which is adjoined to the southern side of Pearl City, should be an extension to the existing township.

RHB Research conservatively estimated the GDV of the 209.54 acre freehold land at RM1bil, adding that there could be further upside over the longer term.

This will suggest an increase of almost 30% to the group’s GDV for all its remaining projects in the portfolio.

RHB Research said the new land ought to allow the management to better plan its township going forward.

The transaction cost of RM14.35 per sq ft is comparable to the land cost of the existing Pearl City, which means that the gross margin of 30% to 40% should be maintained, which is above industry average.

The research house added that Tambun Indah’s patience for land-banking has paid off as land parcels are now cheaper due to sluggish property market conditions.

Earnings forecasts are maintained as Tambun Indah will likely complete the development on its remaining 420 acres over the next five years. 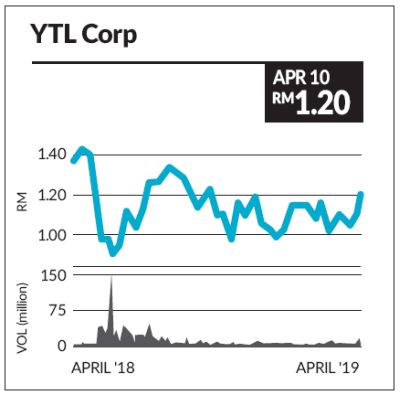 THE potential revival of the deferred high speed rail (HSR) project pending proposals to reduce costs could augur well for YTL, which was previously appointed one of two Project Delivery Partners (PDP).

If revived, this would be a catalyst for YTL’s construction division while construction earnings has seen progressive improvement in recent quarters, given progress in the Gemas-JB Double tracking project.

Construction currently accounts for 3% of the group’s pre-tax earnings.

It added that the woes of Singapore-listed Hyflux Ltd could be a blessing is disguise as it could mean the elimination of excess capacity should there be a dismantling gas supply agreements to Hyflux’s plants as part of its restructuring, if any.

Meanwhile, there are also concerns surrounding the 1Bestari project that is expected to expire mid-CY19, which will be re-tendered out.

YTL Power’s construction of the Tanjung Jati coal power plant in Indonesia was supposed to add an estimated RM4bil, but progress on the financial close of this project has been delayed, presumably given the upcoming Indonesian elections. 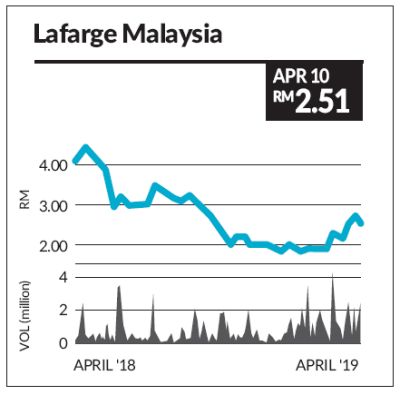 AmInvestment Bank reduced its FY20F assumptions for both average selling price (ASP) and sales volume for cement as it has yet to see any green shoots of recovery in the local cement sector.

While the potential revival of the East Coast Rail Link (ECRL) project may seem positive to Lafarge, the impact is rather insignificant.

AmInvestment Bank estimated that the project will require 1 million to 1.3 million tonnes of cement over a construction period of four years, which works out to 300,000 tonnes annually.

This is only 2% of the annual cement consumption in the peninsula.

The forecasts have yet to reflect the additional demand from the project. If factored in, the net losses for FY20-21F will be reduced by RM13mil each.

The research house also said there are speculations that Lafarge’s parent compay LafargeHolcim may be looking to exit Malaysia following the disposal of its Indonesian unit in November last year.

It added that the cement sector in the peninsula will remain challenging over the medium term due to the wide gap between local demand versus installed capacity.

Apart from hefty capacity cost, the absence of pricing power in a glut means players are also unable to pass on higher production cost to end users. 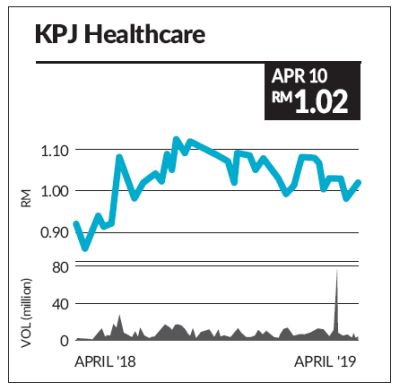 THE group’s KPJ Tawakkal hospital expansion is still in early planning stage. If the expansion plan to construct a new block to add 120 beds go through, it will impact the group in the long term, improving its discounted cash flows valuation.

The expansion is also subject to approval by the Health Ministry. If everything goes well, the construction is expected to begin by end-FY19 and completion by end-FY22.

KPJ Tawakkal is currently operating 200 beds and has an occupancy rate at around 70%. It aims to increase its medical tourist patient visits to 15% from 7% currently through medical tourism initiatives and service offerings.

KPJ has a vast network of hospitals nationwide, and is a preferred counter by the research house for its capacity expansions and its positions to benefit from the national health insurance scheme.

The group had just opened KPJ Bandar Dato’ Onn in Johor Baru in February and is expected to open KPJ Miri, KPJ Kuching and KPJ Batu Pahat in 2HFY19.

The research house also believed that at its current share price, the counter is close to full valuation.