(BPHB) plans capacity expansion of its Bintulu International Container Terminal (BICT) to cope with rising demand as it has recorded double-digit growth in container throughput for three consecutive years.

A feasibility study on the BICT’s expansion is currently under way and the plan will involve infrastructure development and procuring container handling equipment.

“In terms of capacity, the BICT is currently operating at 78% capacity with the utilisation expected to improve further in 2019 in line with expected increase in container volume,” he added.

Reviewing BPHB’s yearly performance, Mohammad said the strong growth had strengthened BICT as the No. 1 container port in Sarawak and Sabah in terms of container throughput and connectivity.

“The impressive throughput was driven by increased import and export due to active economic development in Sarawak Corridor of Renewable Energy (SCORE), particularly the Samalaju Industrial Park (SIP),increasing trend towards containerisation of cargo and more transhipment volumes from Sabah and Sarawak.

As part of the on-going efforts to enhance service and operational delivery,BICT has deployed additional yard equipment and resources to support the container yard’s operations.

BICT is now directly connected to Indonesian ports such as Makassar, Balikpapan and Semarang as well as more ports in China, such as Shanghai,Xiamen and Shokou.

The export of woodchips via Bintulu Port jumped by nearly 190% to 388,759 tonnes from 134,729 tonnes year-on-year due to higher demand from Japan and Indonesia.

There was higher export volume of palm oil products to China, India, Pakistan and US.and Bintulu Port handled some 95% of Sarawak’s total production.Bintulu Port is also the largest palm oil products’ exporting terminal in Malaysia, handling about 26.2% of the country’s total export.

“The LNG export market for cargoes from Bintulu Port saw China emerging as a prominent buyer behind Japan, indicating the rise of China as a major global LNG market.

“To capitalise on this,the group has been actively pursuing opportunities in terms of new ways of handling,transportation and export of LNG via ISO tank containers,” he added. 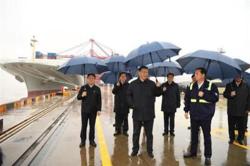