KUALA LUMPUR: The growth of personal financing (PF), which drove the earlier rapid expansion in household debt, has moderated significantly after a series of cross-cutting measures were implemented since 2012.

“The moderation in growth was driven primarily by NBFIs  (non-bank financial institutions), which accounted for more than 40% of total PF,” it said. 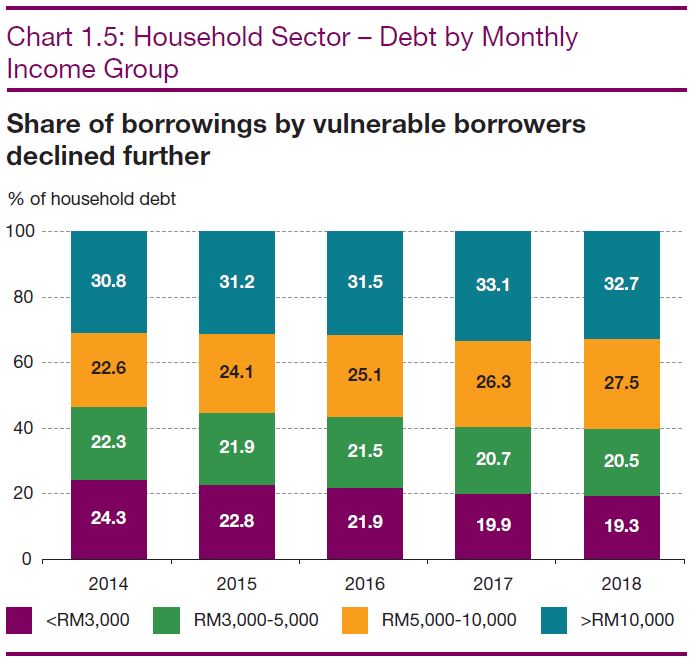 While risks to financial stability from PF exposures are assessed to be limited given the low level of debt-at-risk (2.7% of total household debt), rising default incidents in PF and a sharp increase in the share of bankrupt borrowers  with PF from 2010 warrant continued vigilance.

A survey conducted by Bank Negara of banking institutions and borrowers that sought assistance from Credit Counselling and Debt Management Agency’s (Agensi Kaunseling dan Pengurusan Kredit, AKPK) provided further insights on the profile and use of PF by borrowers, including distressed borrowers.

“About half of total outstanding PF is held by lower-income borrowers (that is, with monthly earnings below RM5,000). The share of PF to their total borrowings stood at 26.6%, almost double that of the average borrower (14.5%),” it said.

PF is used mainly for consumption purposes. Notably, more than one-third of PF are for discretionary consumption expenditure to support lifestyle choices, which include the purchase of durable goods and expenses for weddings and festive seasons.

This was similarly observed among distressed borrowers, which points to persisting behaviour of spending beyond one’s means.

A sizeable share of PF (15%) is also used for consumption of necessities which include emergency- and medical-related expenses, mostly by borrowers earning RM10,000 and below and living in urban centres.

“These borrowers face greater difficulty coping with living costs and unexpected expenses due to poor financial planning,” it said.

Close to half of PF were taken to accumulate assets, mainly to make down payments for house purchases and for business purposes.

“Notably, among distressed borrowers with PF, such borrowings included a significant share utilised for home renovations.

“Given that the appreciation of home values from such expenditure may not always correspond to amounts spent on renovation, highly-leveraged borrowers may find themselves in a negative equity position with debt burdens they cannot afford,” it cautioned.

While incidents of impairment of PF have increased, the level remained low at 0.2% of total household debt as at end-2018. Reflecting strengthened underwriting practices of banks and NBFIs, DSRs for newly-approved PF have generally been below 60% with improvements observed in vintage default rates for PF in recent years, it said.

In 2018, non-financial corporate (NFC) debt grew annually by 6.5% to 103.7% of GDP, driven by the construction, manufacturing and real estate sectors.

Business activity continued to be primarily supported by domestic financing, which accounts for 74% of total NFC debt.

Meanwhile, loans extended by banks and DFIs recovered from very low growth in 2017, with positive and stronger loan growth recorded across most business sectors (4.6%; 2017: 1.3%).

Financing to the wholesale and retail and manufacturing sectors, which account for about 36% of banks’ business loans, was largely driven by higher business activity during the three-month tax holiday.

Outside these sectors, credit supply by banks also remained supportive of business activity, with continued access to financing for small and medium enterprises (SMEs) as reflected by stable loan approval rates.

“Businesses recorded a slight deterioration in financial performance during the year, amid supply disruptions in the commodity sectors, the relatively weaker ringgit and uncertainties immediately after GE14.

“Amid more challenging business conditions, weaker earnings performance in most sectors resulted in a lower median ICR. Notwithstanding this, overall businesses continued to maintain comfortable debt servicing and liquidity positions that were well above prudent thresholds,” it said.