BEIJING: Vice Premier Han Zheng said China will continue to lower tariffs and create a first-rate environment for foreign businesses, ahead of another round of trade talks with the US in Beijing this week.

Authorities will step up the protection of intellectual property rights, forbid forced technology transfer and reduce restricted areas for foreign investment toward the level of access in free-trade zones, Han said at the China Development Forum in Beijing yesterday.

He did not directly comment on the trade war with the US.

The country will “not stop reform and opening up” despite protectionism and unilateralism, Han said.

Han’s remarks foreshadow a new round of trade talks between China and the US when Treasury secretary Steven Mnuchin and trade representative Robert Lighthizer visit Beijing on Thursday.

The trip offers a new hint of optimism as talks on a trade agreement continue between the world’s two largest economies.

China argues its opening of the domestic market to foreign investment is not because of external pressure but to satisfy its own need for development.

Beijing announced measures last year to reduce the shareholding requirements in the financial sector and passed a new foreign-investment law this month aimed at leveling the playing field.

Economic indices so far this year “have come in better than expected,” although the momentum for growth globally is lacking, Ning Jizhe, vice chairman of the National Development and Reform Commission, said at the forum.

The government will take steps to raise people’s potential for consumption and nurture a strong domestic market, including increasing farmers’ income, he said.

China lowered the goal for economic growth to a range of 6% to 6.5% for 2019 while pledging a massive package of tax cuts amid other “targeted” measures to address the weakness.

Revenue growth of all governments have stayed at a low level and alternative funding source from land sales contracted in the first two months, highlighting the lack of fiscal sustainability under soft growth and stronger fiscal stimulus.

The government will improve the structure of its spending and allocate more funding to projects such as key infrastructure and improving people’s livelihood, he added.

China should consider increasing some taxes as it restructures the economy, Nobel laureate Joseph Stiglitz said at the forum. That could include those on the environment, land and capital gains, he said. 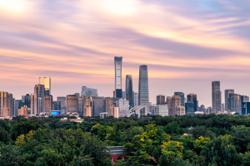 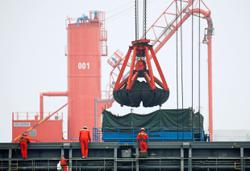