Heineken out to maintain fine run

, much will be expected of Roland Bala, the 53-year-old Sarawakian who assumed the role six months ago.

Going by Roland’s track record though, heading Heineken Malaysia through its next course seems like a role he was destined for.

As a young boy, Roland had to brave the elements and environment. Growing up in a small village in Sarawak, Bala had to travel far each day for his education.

That hardship and determination had served him well as he displayed the traits of not wanting to fail, when he secured his very first job.

Roland, along with his university classmates, had applied for the management trainee position at British Petroleum (BP).

When he found out that he was not selected for the job interview, Roland then thumbed through Yellow Pages and called up the office of BP.

Intrigued by Roland’s persistence, the human resource director then granted him an interview. 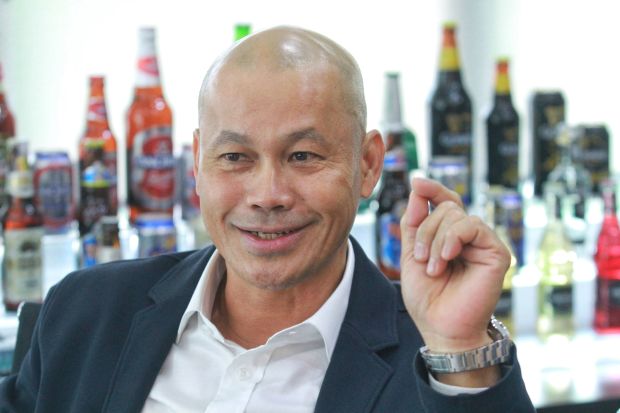 "I believe that my life experience has equipped me with a lot of courage, so I have no fear of these kinds of challenges. I am more concerned about how I can contribute and deliver results." - Roland Bala

At the end of the selection process, Roland was one of the five hired to be a management trainee at BP, from a pool of 4,500 applicants.

Roland spent 16 years of his career at BP.

“When I look back at my career path, it has always been about taking those bold steps that made a difference.

“It is important to know what you want and be daring enough to make the bold move.

“At the age of 41, I decided to step out of my comfort zone and venture into the unknown, by joining the beer industry – partly for the love of beer!

“But it was mainly for the opportunity to run an operating company, which provided a new challenge and I had a lot to learn,” says Roland.

Roland joined Heineken in 2008, and has served the group in Singapore, Vietnam, and Cambodia, before returning to his homeland last year.

In Vietnam, Roland was tasked to grow the mainstream beer brand Larue, which he did, at a growth of one million hectolitres within two years. However, his tenure as managing director of Cambodia Brewery Ltd is perhaps Roland’s most remarkable feat in his career so far.

The brewery’s business was declining then, in terms of profitability and market share, and turnover rate was high at 30%.

“I have been so used to being away from home and learning to be independent, persevere and having the ‘can do’ attitude.

“I believe that my life experience has equipped me with a lot of courage, so I have no fear of these kinds of challenges.

“I am more concerned about how I can contribute and deliver results,” he says.

Cambodia Brewery was able to double its profitability within the first year of Roland’s stewardship, and saw its market share more than double since February 2012.

This, in turn, established Cambodia Brewery as the market leader in Cambodia.

Roland’s success story in turning around the Cambodian business caught the attention of Heineken Malaysia who had just seen the service of two successful managing directors.

Having worked in Malaysia with BP prior to Heineken, Roland is familiar with the culture, local business landscape, and the way people run businesses in Malaysia.

“I look at it as a good opportunity for personal growth as well.

“My previous experience in Heineken has been in emerging markets, and it is definitely exciting to see what a slightly more mature and complex market brings.

“I am truly honoured to be the very first Malaysian managing director – it is a big privilege and I dedicate this to the Malaysia Boleh spirit,” he says.

Roland replaced Hans Essaadi who had managed to propel Heineken Malaysia’s topline by 15% to RM1.93bil in FY17 and net profit by 24% to RM270.22mil over a five-year period.

Roland has since been on the job for six months, during which Heineken Malaysia delivered a net profit growth of 6.7% to RM99.99mil for the fourth quarter of FY18, compared with the same quarter last year.

This was due to higher revenue as well as efficient and effective management of commercial spend and overheads.

Notably, it was one of the highest quarterly growth rates over the past three years.

Roland is also helming Heineken at a time where breweries are enjoying a relatively good time.

The share prices of Heineken Malaysia and Carlsberg Malaysia have been on the uptrend.

Both brewers are favoured among yield-seeking investors and their combined market capitalisation of some RM14.8bil make them significant participants in Malaysia’s capital market.

All performance indicators seem to be pointing north and are set to stay on course despite the usual challenges in a heavily regulated and taxed industry in the nation.

“My predecessors have left the company with a very solid foundation, portfolio of brands, route to market and team.

“Hence, my role is to further extend that market leadership in both market share and value share.

“It is my hope that I can inspire my team to go for extraordinary results,” says Roland.

Heineken Malaysia’s revenue for FY18 rose 8.3% to RM2.3bil, mainly attributed to higher sales volume, price adjustments on April 15, 2018, as well as the implementation of the sales and service tax on Sept 1, 2018.

As the group upholds its mandate as a socially responsible company and a good corporate citizen, it tries to reward shareholders with consistent returns.

The brewer paid out a total dividend of 94 sen for FY18.

Right now, Roland is focusing on setting the ambitions and strategies for the group.

He believes it is vital that the team is well engaged in understanding the group’s path of growth going forward.

“We are a company that is constantly innovating and that is a good DNA of a successful operating company.

“Coming from a background of simplicity and focus, I would like Heineken Malaysia to primarily focus on its core brands.

“In addition to that, we will be making big bets on innovations that can scale us,” says Roland.

Good times: The share prices of Heineken Malaysia and Carlsberg Malaysia have been on the uptrend.

The core brands, which represent a significant segment of the market, are namely, Heineken, Guinness, Anchor, and Tiger.

With the aim of accelerating growth for the core brands in terms of market share and value share, Heineken Malaysia’s strategies would depend on consumer trend studies to determine what scales and what works.

Roland stresses that the group will need to strengthen its route to market strategy and simplicity of execution.

Essentially, the route to market strategy entails the method of delivering the product to the end customer and to a certain extent, generating demand for the product in the market.

While Roland does not divulge further on his planned strategies for the core brands, he hints that the group will be leveraging more on digital initiatives in the way the group serves its customers, as well as automation to drive efficiencies.

Going forward, the brewery industry is expected to be slightly challenging compared with 2018 given the increasing raw material prices and the depreciation of the ringgit that will put pressure on margins.

Prices of raw materials like barley have been on the rise due to low crop yields.

In addition, as prices are pegged to the euro, the depreciating ringgit adds pressure to the breweries.

The costs of packaging materials too are increasing.

As such, not only does Heineken Malaysia have to be prudent in cost optimisation, it also has to raise its selling prices by up to 5% on selected products and pack types to absorb higher costs.

This will take effect on April 1.

Then, there is also the impending sugar tax that has been postponed to July.

Heineken Malaysia is adopting a cautious stance on the industry’s outlook, as it keeps a close eye on top line growth and cost, amidst an arena of intensifying competition.

Another major challenge faced by breweries is illicit beer. Roland notes that there has been much progress with the new government in the practice of good governance, as well as eliminating corruption and leakages in the crackdown of illicit beer trade.

This cleanup has resulted in better top line growth opportunities for breweries and revenue collection for the government.

In the first two months of 2019 alone, there has been an estimated 325 cases charged for possession of illicit goods.

“We are grateful that the government has not increased the excise duty for alcohol as it will drive the trade of illicit beer, given the low income per capita of Malaysians.

“Malaysia, Singapore and Norway are the three nations with the highest excise duty on alcohol.

“We will continue to engage with the government and provide our support in stemming this menace,” says Roland.

Malaysia pays an excise duty of RM175 per 100% volume per litre of alcohol.

This is mainly attributed to better enforcement by the authorities as well as better consumer awareness of the dangers of illegal alcohol consumption due to the deaths that occurred in 2018.