Employees arranging the freshly made PVC-O pipes which will then go through a series of tests before it goes to its inventory. FAIHAN GHANI/The Star.

Over at Molecor’s (SEA) plant in the Gebeng Industrial Area, it would seem that there is no one at the working floor.

The production process of the orientated polyvinyl chloride (PVC-O) pipes is almost fully automated using state-of-the-art technology from Spain that it only requires two workers per production line.

This enables the company to maintain a lean team of only 40 people, including management and administration staff at the plant, which runs 24 hours a day, seven days a week.

The noise level is also considerably low despite having three production lines in the plant.

The opportunity to produce PVC-O pipes presented itself back in 2012, when Molecor Tecnologia Spain was scouting for local partners in South-East Asia.

However, conditions turned when the government started to see the potential of using PVC-O pipes in the mass replacement of asbestos cement (AC) pipes across Malaysia.

AC pipes, a relatively obsolete technology, are still being used in the water distribution system, making up an estimated 27% or 41,560km.

AC pipes have been found to rupture easily, have a shorter lifespan and there are concerns regarding the carcinogenic components of asbestos.

In the mass replacement of pipes, factors like logistics, speed of installation and cost have to be taken into account.

According to Molecor (SEA) CEO Farid Mohamed Nor, PVC-O pipes have a higher tensile strength due to its layers and are found to be five times stronger than PVC pipes, despite its thinner pipe structure.

“PVC-O pipes have a higher tensile strength and is less susceptible to cracks due to its layers.

“Its lightweight feature allows for easy transportation, which will be convenient for pipe replacement works in rural areas.

“This minimises the need for heavy machinery,” he says.

With the plug-in socket system, the installation of PVC-O pipes is fast and easy as no welding is required.

In fact, one kilometre of PVC-O pipes can be installed in a day, cutting project durations short.

It is also the only pipe approved in Malaysia for all pipe-laying conditions for under-road pipe replacement, without the requirement of a concrete sleeve.

Molecor (SEA) has obtained approval for HYPRO PVC-O pipes to be used in Malaysia’s water sector by the National Water Service Commission.

Besides that, the PVC-O pipes have a longer design life of more than 50 years, as compared to PVC pipes of 30 years.

PVC-O pipes’ resistance to chemical attack and corrosion reduces the need for frequent replacement of pipes.

“This translates to a total savings of 20% to the end user,” says Farid.

, the parent company of Molecor (SEA) Sdn Bhd, then entered into a joint venture in 2013 to build the PVC-O plant.

The group’s 65%-owned subsidiary Molecor (SEA) Sdn Bhd is the manufacturer of PVC-O pipes marketed under the HYPRO brand, with Molecor Tecnologia Spain as the principal and technology partner.

The workers on the production line would usually monitor the settings and the temperature for heating and cooling and then conduct checks on the batches produced.

Every time there is a change in adjustments or parameters, a sample from the batch of production will be taken to the lab for a stringent and rigorous process of testing.

Once it passes this test, the batch will then be given the green light to be processed into oriented unplasticised polyvinyl chloride (PVC-O) pipes.

A sample of the batch will then undergo the impact test where the pipes are frozen at 0°C and then hit with a striker to test its brittleness.

It will then go through other tests, such as tensile test, ring stiffness test and lastly, the pressure test which lasts for 10 hours.

Situated in the middle of the industrial heartland of Kuantan, the plant is located some 9km away from the Kuantan Port for the ease of logistics.

Plans are underway for Molecor to add three more lines.

Currently, Molecor (SEA) makes a small export of its pipes to Papua New Guinea, but it is the Malaysian business potential that interests the company more.

Molecor (SEA) is the sole manufacturer of PVC-O pipes in Malaysia and has manufacturing and distribution rights for Southeast Asia.

In 2017 alone, an average of 5.93 billion litres of treated water is wasted each day, nationwide.

That amount is more than enough to meet the water demand in Selangor and Johor.

To date, up to 450km of PVC-O pipes have been installed across 10 states.

According to Fitters managing director Datuk Richard Wong, there is a remaining budget of RM1.3bil under the 11th Malaysia Plan, to be spent over the next three years to resolve the NRW issue.

The contract award is expected to contribute positively to Fitters’ financial performance for the years ending December 31, 2018 to 2020.

For a start, the HYPRO PVC-O pipes will be utilised to replace ageing AC pipes in Kelantan and Johor.

The water pipes rehabilitation and replacement programme will be rolled out to other states in the near term.

“We will be participating in the open tender process for the installation of PVC-O pipes to replace the existing AC pipes, via Fitter’s construction subsidiary.

“Prior to this, we were only involved in the supply of PVC-O pipes, and smaller contractors were installing them,” said Wong. 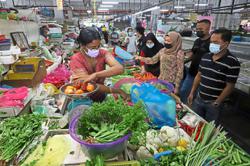