Teresa Kok travels near and far to promote the local commodity

PRIMARY Industries Minister Teresa Kok Suh Sim proves me pleasantly wrong during a two-hour exclusive interview at her office in Putrajaya this week.

I had expected the 54-year-old politician, who has only held the demanding post for seven months since July 2018, to read from the written text in her reply to StarBizWeek questions. But she rattles on without even glancing at the answers prepared by her officers.

From palm oil and rubber to cocoa and wood products; from upstream activities to downstream manufacturing; from local to international issues, the well-groomed Cabinet member articulates with confidence. The lady with the energetic look monitors prices of commodities daily. Before the interview starts, she even provides updates on the latest price of crude palm oil (CPO).

She disputes the common belief that China has cut down on local palm oil purchase because of strained Malaysia-China relations after Prime Minister Tun Dr Mahathir Mohamad took over the government in May.

Although the good talker shows uncertainty over some figures, it is clear from the entire interview that she has worked hard to understand the various commodities, issues and market forces, after making some early blunders that had held her up as an object of ridicule by Opposition politicians, the media and industry experts.

The MP from Seputeh says she has traversed the whole country to hold dialogues with industry players – both upstream and downstream – looking into their plight amid depressed commodity prices, the US-China trade war and economic uncertainty.

Beaming with pride, she adds that she now has “the listening ears” of the prime minister, who had complained in September and October that many of his inexperienced Cabinet ministers had not performed up to expectations.

However, Kok declines to give herself any rating on her performance as the Primary Industries Minister.

She merely says: “In the last half year, I learnt a lot about various commodities, agencies and industries (involved) and their problems. Now, I am working hard to bring about reforms and changes (to the agencies and boards under me).”

Among the reforms she has in mind is to bring back the focus on research in the Malaysian Rubber Board and the Malaysian Palm Oil Board, to “invent” new breeds of high-yielding commercial crops to raise revenue.

This is particularly important for palm oil, as she is drafting a Cabinet Paper that includes restricting the cutting down of forests to plant the golden crop. Hence, for planters to increase production without area expansion, they have to increase their yield per hectare.

Without a doubt, palm oil – the commercial crop that brings in the most revenue for the country – will be the centre of activity in Kok’s ministry for this year, after experiencing a downturn last year.

As this crop feeds more than 650,000 smallholders and millions of plantation workers, Kok has come under intense pressure to perform and deliver results. To reduce stocks, which stood at 3.2 million tonnes at end-December, Kok has succeeded in persuading refiners not to import CPO from Indonesia for refining purposes now.

She attributes this temporary halt in importing CPO to the recent climb in palm oil prices.

In the immediate future, Kok wants to visit China – once the largest buyer of Malaysian palm oil – to meet her counterpart, state-owned companies and potential buyers to persuade them to buy more local palm oil.

During Dr Mahathir’s official visit to China in August, Beijing promised to buy an additional 500,000 tonnes of Malaysian palm oil at “market prices”, but this did not materialise partly due to higher prices in Malaysia compared to Indonesia.

“There is hope China will buy more palm oil from us. CPO prices in Malaysia are more or less the same as some parts of Indonesia, after Indonesia revised its export tax,” says Kok.

She believes China’s palm oil purchase is not linked to Malaysia-China relations. Such deals are done between businesses whose decisions are influenced by prices, she argues.

She notes that during Najib’s time, China did not buy more palm oil as pledged.

“Anyway, our relations with China are not that bad. Transport Minister Anthony Loke just came back from China,” she says.

Apart from China, Kok also has plans to visit India and Pakistan – the other two major consumers of palm oil.

Excited about the fact that the Philippines had bought 700,000 tonnes of Malaysian palm oil last year, the driven minister wants to open up new markets in Vietnam and Myanmar, without omitting Turkey and the Middle East.

Kok expects that Malaysia’s B10 biodiesel programme this year, implementing from this month, would remove 710,000 tonnes from palm oil stocks.

Fighter but ‘no Keng Yaik’

For the fearless fighter of women’s rights, the toughest test facing her now is to counter the current anti-palm oil campaigns in Europe.

The European Union (EU) bloc is one of the three leading importers of Malaysian palm oil, along with China and India.

In April 2017, the European Parliament passed a palm oil resolution, which when enforced in 2020, would eliminate the use of palm methyl ester from Malaysia and Indonesia in biofuels.

In recent months, several members of the EU began passing similar anti-palm oil laws in their legislative bodies. These include Switzerland, France and Norway. 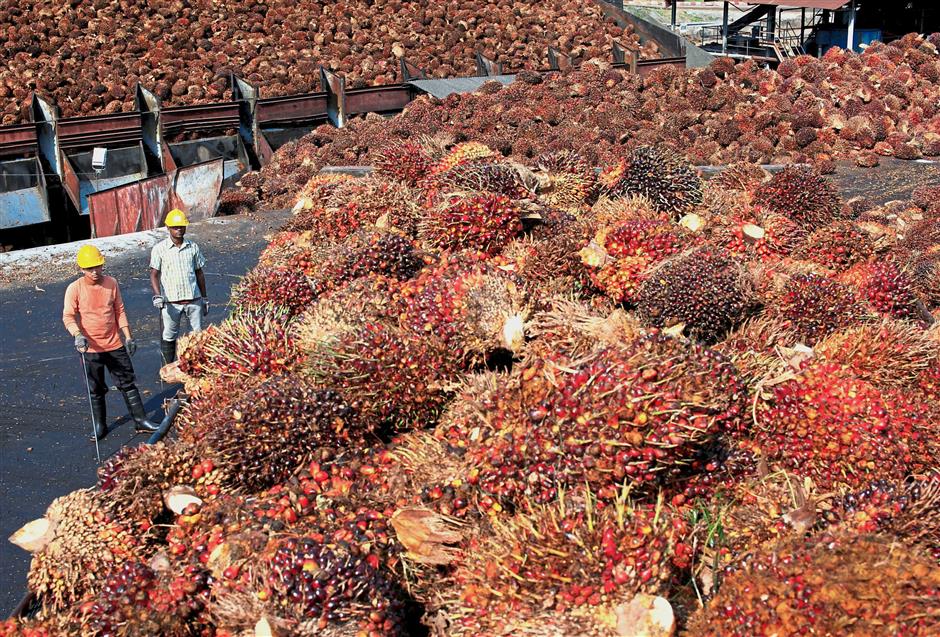 All sound and fury: Although threats of retaliatory measures against Norway and France have been announced and supported by the Palm Oil Industry Forum, so far, there has been thunder but no rain. — Reuters

Anti-palm oil campaigns are also aggressively being carried out by Greenpeace and other non-governmental organisations.

What is demoralising for Malaysia is that a recent bulletin by the World Health Organisation carried an article that shows bias against palm oil.

“Within the last half-year, the anti-palm oil sentiment in Europe has been very high – this sentiment has even crept into Malaysia,” Kok says, noting that some local supermarkets are selling products with “no palm oil” labels.

On the international front, Kok might want to fight tooth and nail against the EU for hurting Malaysian palm oil exports. But as many have pointed out, she is “no Keng Yaik”.

The late legendary Tun Dr Lim Keng Yaik, Primary Industries Minister from 1986 to 2004, is fondly remembered for bravely debating with powerful soya bean producers in the United States at a time when the US had banned the import of Malaysian palm oil after strong lobbying from the American Soybean Association (ASA).

Kok also says she will not go to the EU in the near future until she addresses all the concerns expressed by the EU: sustainability, deforestation and killing of wild life.

What Malaysia has done so far is sending out letters of protest to EU countries that have passed anti-palm oil laws.

Although threats of retaliatory measures against Norway and France have been announced and supported by the Palm Oil Industry Forum (which groups most palm oil players), so far, there has been thunder but no rain.

But being no “Keng Yaik” does not mean Kok is a lesser minister.

While Keng Yaik, blessed with a strong command of the English language and extraordinary oratory skills, was more of a lone ranger in the Malaysia-ASA battlefield, Kok has devised a clever strategy to rope in the Prime Minister and other ministers to provide support both locally and internationally.

At the start of this year, she launched the year-long “Love MY Palm Oil” campaign, which aims to instil national pride and greater appreciation of palm oil as a healthy oil among Malaysians.

“If we are to fight the anti-palm oil campaigns that are threatening our people’s livelihood, Malaysians themselves need to know and love our own palm oil,” she said at the soft launch of the campaign.

In conjunction with this campaign, that may result in local palm oil consumption increasing by 500,000 tonnes to 2.5 million tonnes a year, Dr Mahathir has appeared in a video clip to talk about the uses and goodness of palm oil.

Before this, the prime minister had spoken at various international forums on palm oil.

Not to be missed is the CNY reception on Feb 6, to be hosted by Finance Minister Lim Guan Eng and the National Chamber of Commerce and Industry. Guan Eng is expected to drill 3,000 guests, among whom will be Dr Mahathir, with a lecture on how to support the economy by consuming more palm oil.

Dr Wan Azizah has spoken up at the Asean-EU forum, while Foreign Minister Datuk Saifuddin Abdullah did so at the Asean meet, jointly with Indonesia.

Apart from winning over the hearts of her Cabinet colleagues, Kok has also displayed her public relations charm in dealing with mentris besar (MBs) from PAS-controlled states.

On Jan 29, she got the endorsement of Kelantan MB Datuk Ahmad Yakob and Terengganu MB Dr Ahmad Samsuri Mokhtar to support the “Love MY Palm Oil” campaign. The proof is captured in a photo on her mobile phone (see pic).

Given that the DAP and PAS are sworn enemies in politics, the cooperation pledged by these MBs can be seen as an achievement for Kok. But one can also argue that it will be politically unwise not to support this national patriotic movement.

Meanwhile, companies have come out in support of the palm oil campaign. These include Malaysia Airports Holdings Bhd

The airlines and MAHB will carry the factual information on palm oil via digital information screens, in-flight magazines and entertainment systems, art and product displays.

With undivided support for her efforts, the elated minister smiles: “I am happy my Cabinet colleagues did not let me fight the anti-palm oil campaign alone.

“We are fighting the battle together. Everybody must join in. This is a battle of Malaysia.”

Getting to grips with the labour shortage problem